Mansfield have announced that they have completed the signing of former Exeter goalie Bobby Olejnik.

The Austrian came to Exeter having been released by Peterborough in the summer of 2015. The 30 year old made 76 appearance for the Grecians, and played in goal for the two semi-final play off games against Carlisle, but was on the bench for the Blackpool game at Wembley. 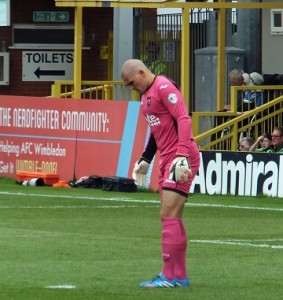 The lad is an experienced goalkeeper who has a real burning desire to again play Championship football and for sure he is very capable.

I am delighted that Bobby has joined us, considering he had a few options in League One to consider.

The lad is an experienced goalkeeper who has a real burning desire to again play Championship football and for sure he is very capable.

I ran a final analysis on Bobby when I watched him against Carlisle United and Blackpool in the recent League Two play-offs and it has to be said that he was excellent, so I went about meeting him with his representatives.

Once again our CEO, Carolyn Radford, was able to negotiate strongly and get a deal suitable for the lad to want to be at Mansfield Town.

Bobby readily accepts he has a real fight to claim a starting spot, given we have already Conrad Logan signed. Both of these lads are ambitious and will want to be playing and for me, competition for the shirt is the best way to inspire the best performances.

League Two next season is going to be so tough. I really respect the work going on at a host of clubs. Exeter City, Luton Town, Carlisle United, Coventry City, Cambridge United and Crewe Alexandra all stand out to me as having significantly strengthened plus we have Swindon Town, a super football club who are at least two leagues lower than they should be so we have lots of work to do in the weeks ahead.

Previous: Exeter Publish Retained List
Next: Sale of seats from the Old Grandstand