A hard-earned draw away to fellow promotion chasers Luton sees City return home for a local derby in decent spirit. Jordan Moore-Taylor is expected to be fit for Saturday having been taken off early at Luton with a head injury – indeed Paul Tisdale suggested the only reason he was substituted was that it would have meant City playing for a long time with 10 men while he was being patched up. Also hoping to return may be Christy Pym – Tisdale targeted this weekend for his return but admitted it’s a tricky one to assess fully, while it’s too soon for Lee Holmes to return following the knee injury he picked up in the reverse fixture.

It’s fair to say this fixture probably has more bearing on City’s season than that of their opponents. Yeovil come into the game seemingly safe from relegation but too far off the pace to mount a late promotion challenge, so pride and possibly new contracts could define how the Glovers approach their remaining fixtures this season. This may be reflected too in the fact Yeovil have managed just one win since the end of January (as opposed to City’s two wins!), that in effectively a dead rubber at Morecambe. Goals have been an issue for Darren Way’s side, Francois Zoko has 11 goals but only six in the league to be top scorer. Stopping them at the other end is a familiar face in former City keeper Artur Krysiak, the Pole will be keen to keep another clean sheet against his old employer. 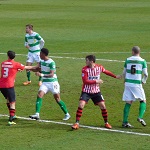 long in the memory, the only moments of note being an erroneous whistle from the crowd which caused some bemusement, and the innocuous challenge between Krysiak and Holmes that has led to the latter’s long lay off. Last season’s match at the Park took place on the opening day, and City emerged victorious 3-2. Nichols (pen) and Wheeler had City 2-0 up at half time, only for Yeovil to come back to 2-2 through Cornick and another penalty from Dolan. Then came Will Hoskins from the bench to score the winner on his debut, promptly earn cult hero status briefly then barely play again all season. City have the Football League head to head lead with three wins to Yeovil’s two, but those who like a flutter may put this down on the Pools as the sides have drawn four times.

The match officials that have been appointed for this game are:

Drysdale has refereed five Exeter games, the most recent one being the visit of Morecambe last April. Details of those last 5 game games can be found at http://www.grecians.co.uk/wordpress/?s=drysdale

The last time Yeovil visited the Park was August 2015, details of that game can be found at http://www.grecians.co.uk/wordpress/?sp_event=4116