City got their promotion push back on track with a convincing 3-0 win against relegation threatened Cheltenham on Tuesday night, a result that kept Paul Tisdale’s side in the playoff places and, combined with some helpful results elsewhere, means City could go fourth on Saturday if they manage to win on their travels against another side in the playoff zone. The most eye-catching personnel shift on Tuesday, aside from the three rested players returning to the starting line-up, was Jordan Tillson coming into the side in place of the talismanic Ollie Watkins. Tillson’s performance, however, means it will be very difficult to drop him to accommodate Watkins meaning either the 21 year old remains on the bench or he comes in for someone else such as Ryan Harley. Tisdale noted during the week that Christy Pym is still a week or so from a return, while Lee Holmes is edging closer to fitness but has not yet returned to full training.

Luton, one of the bigger spenders in the league, have once again been installed amongst the promotion favourites, and sit very much in the mix in 5th place going into this weekend’s vital fixture. However, recent form has not been the best, with one win in their last five in the league as well as defeat to League One Oxford in the Checkatrade Trophy semi final. On Tuesday night they travelled up to Carlisle and emerged with a 0-0 draw against another promotion chasing side that itself appears to be in freefall. All eyes will be on Danny Hylton, who has 22 goals in all competitions as he seeks to be promoted for the second successive season.

Luton signed former City loanee Lawson D’Ath from Northampton during the January window but he has been left on the bench for the last month and may have to be content watching from the sidelines again.

Saturday marks the third occasion the sides have crossed paths this season. The first meeting took place in the FA Cup, where City felt they didn’t get the rub of the green in conceding two soft penalties (both converted by Hylton) in a 3-1 defeat. Reuben Reid scored City’s goal and Glen Rea the other Luton goal, while Pelly Ruddock was sent off with the score 2-1. A couple of weeks later things were a lot quieter in a 0-0 draw. City last visited Luton on the final 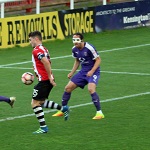 day of last season and in a first half to forget found themselves 3-0 down (McGeehan, Marriott and Pigott). Jayden Stockley signed off from his stunning loan spell with a goal early in the second half only for Marriott to notch his second to complete a convincing 4-1 win. Luton have a substantial league head to head lead with 25 wins to City’s 11 (13 draws).

Trevor Kettle has refereed seven Exeter games, full details of those game can be found at http://www.grecians.co.uk/wordpress/?s=kettle

Full details of last season’s visit to Kenilworth Road can be found at http://www.grecians.co.uk/wordpress/?sp_event=4067