It had to end at some point, but for City’s amazing run to come to an end in a Devon Derby in a scoreline that makes it look like a thumping was hard to take. There is no time, however, for City to

dwell upon this misfortune as Paul Tisdale’s side faces a Valentine’s Day trip to a side battling for its life at the foot of the table. One defeat is unlikely to make Tisdale push the panic button, so expect few if any changes to be made.

The life and times of Notts County in recent years have resembled a soap opera, with boardroom comings and goings, a revolving door of managers and a slide towards the trap door into non-league. A recent takeover will hopefully have alleviated the financial issues for the Magpies, while yet another change of manager has led to a slight upturn in fortunes. Kevin Nolan, himself no stranger to basket case clubs having had a brief spell managing Leyton Orient (is there any other kind of spell at the Os?), has taken charge following the dumping of John Sheridan (whose reward for failure was to be appointed at a club a division above). Under his aegis have halted a run of ten successive league defeats to win their last two home fixtures, latterly beating Cheltenham 2-1 in a huge six-pointer at the weekend. The decisive second goal was scored by former City defender Richard Duffy, who will be hoping to continue his side’s improvement against his old employer. The other goal came from veteran Jon Stead, only his second goal since his double against City back in September. He will likely partner ex-Newcastle forward Shola Ameobi up front, Ameobi having signed on a free from Fleetwood.

That double from Stead in September proved the only goals in a routine 2-0 win for a Notts County side at the time flying high while City were down at the bottom. City supporters braving the wrath of their other halves will be hoping, however, for a repeat of last season’s trip to Meadow Lane which saw City coast to a 4-1 victory – Jayden Stockley’s first half goal was cancelled out by Izale McLeod, before City ran riot in the second half with goals from Jake Taylor, Christian Ribeiro and Ollie Watkins. The Magpies, however, hold a comfortable league head to head lead with 16 wins to 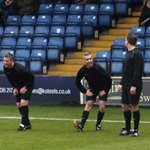 City’s 8, although betting types may look to the third option as there have been 17 draws in this fixture.

This will be Sebs third game in charge of Exeter City, haven previously taken charge of aways games at York and Bury (see here for details).