The Devon Derby always has a special focus in the South West, but Saturday’s trip down the A38 appears to have taken on another dimension as a result of City’s record-breaking run,

which has seen both Paul Tisdale and Ollie Watkins nominated for their respective monthly awards, and has propelled City right into the promotion mix. David Wheeler’s brace in the 4-0 demolition of Crewe has ensured his place in the record books having scored in seven successive league games, while City’s seventh consecutive win has set a new single-season record. A further record, that of unbeaten matches, can be equalled on Saturday should City avoid defeat. The win over Crewe did come at a cost, with Reuben Reid forced to sit out with a bug while Jordan Moore-Taylor and Ollie Watkins both departed the scene early with knocks. Reid will definitely be back and in contention to face his former club, while it’s anticipated that both Moore-Taylor and Watkins should also be available. Otherwise it’s likely to be “as you were” once again as City’s continuity has gone hand in hand with form.

After missing out at Wembley last season, Derek Adams’ side didn’t sit around feeling sorry for itself

and has instead set about righting the perceived wrongs of a season where Plymouth’s promotion appeared to be nailed on before an alarming dip in form late on. Several additions were made to the squad including one-time City trainee David Fox, son of ex-City boss Peter. The Pilgrims, unlike City, were also busy in January, losing Ben Purrington to Rotherham but augmenting the squad with four additions, including a former City loanee in Ryan Taylor, signed from Oxford on a free transfer. Recent league results, interspersed with taking Liverpool to an FA Cup replay, have been up and down – defeat to Yeovil last Tuesday followed up with a 1-0 win at Cambridge, but Saturday’s match sees Plymouth still fully nine points clear of City in fourth place. The goals have been shared around, with only Graham Carey (10 goals in all competitions) in double figures. Arnold Garita, who was very impressive at the Park earlier in the season, has been missing since mid-January. 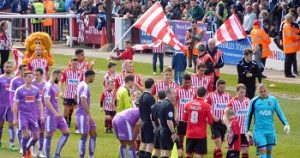 winners (Carey, Garita) in a match that for City was noteworthy only for the second half introduction of Reid for his City debut. City fans will instead look to last season’s visit to Home Park where a brace from Ryan Harley, one from the spot, clinched a 2-1 win (Threlkeld reduced the deficit). Plymouth hold a comfortable league head to head lead with 28 wins to City’s 19 (20 draws).

Hooper is a familiar figure at St James Park and in all has refereed 15 Exeter games, the last being the 4-1 win at the Park by Oxford United last season. Details of those 15 games are at http://www.grecians.co.uk/wordpress/?s=hooper

The last time we met Plymouth Argyle at Home Park was last season, details of that game can be found at http://www.grecians.co.uk/wordpress/?sp_event=4095