With City having confirmed their “favourites” tag last week away to a Morecambe side whose recent home record is even worse than theirs, it’s back to what should be home comforts – City have at least

been able to play in front of their fans in the cups, having beaten Brentford and “Chelsea” so far – with the visit of fellow League Two side Luton in the FA Cup. Paul Tisdale will be keen to boost City’s coffers with a similar run to that of last season that ended in a 3rd round replay at Anfield. A City match wouldn’t be a City match without injuries, and Christy Pym is likely to miss out after the gash on his leg sustained in winning a 50/50 with Kevin Ellison. Bobby Olejnik is set to deputise although Tisdale has dropped hints that James Hamon may also be in contention. Lee Holmes and David Wheeler also played through knocks and will hope to feature, while there is little news emerging of the rest of City’s walking wounded.

Luton, under first time manager Nathan Jones, have continued to spend big in pursuit of a place higher up the pyramid, and have started the season well, currently lying in fourth place in the table on the 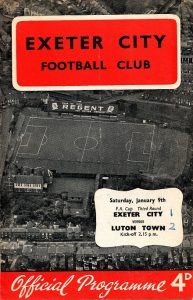 back of an eight match unbeaten run in all competitions, although their last two matches have both finished level. It would appear that the key is to stop Danny Hylton and Cameron McGeehan – both have eight goals in all competitions, with Jack Marriott trailing with three. Another player to watch, assuming his parent club allow him to play, is Newcastle’s Alex Gilliead, who caught the eye on loan with Carlisle last season. Another loanee, goalkeeper Christian Walton, is a colossal presence.

Last season’s league fixtures saw Luton take the points. The match at The Park yielded a contentious 3-2 win thanks to a hotly disputed winner – Luton had gone 2-0 up in the first half through a McGeehan penalty and Danny Green, then near namesakes Nichols and Nicholls levelled things before Paul Benson’s winner. The return was an end of season stroll for the hosts as Luton won 4-1, going 3-0 up in the first half through McGeehan, Marriott and Pigott. Jayden Stockley signed off for City by pulling one back before a second from Marriott killed the game off. The sides have met three times in the FA Cup before – the last a 2-0 replay win for Luton (after a 1-1 draw) in 1966/67, the other a 2-1 win for the Hatters in 59/60, the season after they’d reached the Final for the only time in their history.