A hard-fought three points at Accrington will have been just the tonic for Paul Tisdale’s City side as they prepare to take on top flight opposition in the EFL Cup on Tuesday night. Troy Brown returned from injury on Saturday to ease the pressure on City’s stretched resources, although a number of players are still missing from the side for one 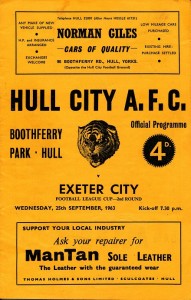 reason or another. Tisdale rang the changes elsewhere too with starts for Craig Woodman and Connor Riley-Lowe, the likes of Liam McAlinden having to be content with a place on the bench. With matches coming thick and fast currently don’t rule out further changes for Tuesday although naturally every available member of the squad will be desperate to feature and put their name in the spotlight as 15 year old Ethan Ampadu did in the win over Brentford in the first round.

Given the turmoil at newly-promoted Hull, with manager Steve Bruce walking out on the eve of the season, the vultures were circling amidst impending doom for the beleaguered Tigers. However, caretaker manager Mike Phelan couldn’t have wished for a better start as Hull sit proudly amongst the giants in third place after a 100% start – a 2-1 win over champions Leicester followed up with a 2-0 win at Swansea on Saturday. No doubt Phelan will rest a number of players at City – it has been a long hard season after all – meaning fringe players like Bowen and Luer will take the place of more established stars like Abel Hernandez, especially with a visit from Phelan’s old club Manchester United at the weekend looming.

Perhaps the main reason why the visit of a Premier League side hasn’t really captured the imagination of City’s support is that until City’s relegation from the Football League the sides had been regular foes in the fourth tier before Hull’s rapid ascent, aided by the move to their stadium thanks to the local authority being flush with cash at the time. Indeed it was Hull who effectively relegated City by losing to Swansea on that fateful final day. Hull visited City in mid-August that season, a match which gave massive false hope to the City faithful as Hull were sent packing 3-1 against a City side containing pedigree in the shape of Lee Sharpe and Don Goodman. City, in a disastrous season, actually took a point from Hull too after coming back from 2-0 down thanks to a stoppage time goal from Steve Flack. Hull do, however, enjoy a healthy Football League head to head lead with 19 wins to City’s 7 (6 draws) while Soccerbase points also to one League Cup tie, back in the 63/64 season, which Hull won 1-0.

Details of the last 46 games played by Exeter City in the League Cup http://www.grecians.co.uk/wordpress/?page_id=1990