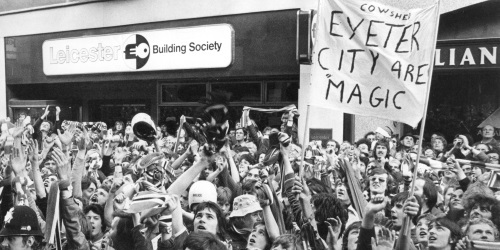 The South West Heritage Trust has teamed up with Exeter City football fans to help preserve the city’s sporting heritage and make it more accessible.

active heritage programme. Over the last two years it has been collecting club records and materials from many different sources.

The Devon Heritage Centre in Exeter recently took delivery of the first collection. This includes the club’s board minutes from the 1930s, as well as material relating to the Exeter City Supporters’ Trust, which has owned the club since 2003. There is also a large collection of scrapbooks compiled by a fan.

The club has been very important locally since its foundation over a century ago. We’re delighted to have a part in preserving the club’s history and making it available to fans and researchers. When cataloguing and digitising is complete the records will be available to view at the Devon Heritage Centre. 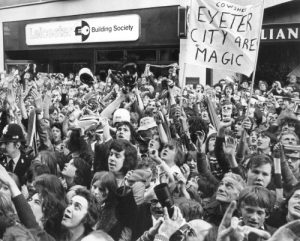 Working alongside a team from the University of Exeter, the club and the Supporters’ Trust History Group are already using the collections to share the club’s history and heritage, including through the online Grecian Archive.

Will Barrett, co-director of the Grecian Archive, said:-

Work over the past few years has not only helped us to record and investigate the history of the club. We’ve also been finding new ways of remembering, telling and enjoying the club’s story. It’s vital that the materials given to us are cared for in the best way, so we’re delighted to be working with the Devon Heritage Centre.

The Devon Heritage Centre is part of The South West Heritage Trust, an independent charity committed to protecting and celebrating Devon and Somerset’s rich heritage.

The Grecians Archive can be found at grecianarchive.exeter.ac.uk. The photographs used in this article has also been supplied by the Greacian Archive,

Previous: Next Up: Exeter City vs Crawley
Next: More than £1,000 for Adam Stansfield Foundation by Supporters Football Match