Exeter City play against Premier League Hull City in the second round of the EFL Cup on Tuesday 23 August at St James Park.

The Tigers, who were promoted via the Championship play-offs last season, got their season off to an excellent start last weekend when they beat Premier League title holders Leicester City 2-1 at the KC Stadium.

Norwegian international Adama Diomande and Scotland midfielder Robert Snodgrass both scored in that game and should be in the squad travelling to St James Park, along with the likes of Curtis Davies, Abel Hernandez and Ahmed Elmohady.

A big crowd is expected for the match, with ticket prices for the game offering excellent value to see the Grecians take on Premier League opposition.

Adult tickets can be purchased for just £15 in the Big Bank and Stagecoach Stand, which is half the price of the cheapest matchday ticket for a Premier League game for the 2015/16 campaign which stood at £30.68.

The is also great value for students – who can get anywhere in the ground for £5, while under-18s can get into the Big Bank and the Stagecoach Family Stand for just £2.

As with the cup game against Liverpool last season the match against Hull City on Tuesday night promises to be another great occasion for the club and a great chance to see the Grecians match themselves against a Premier League team. 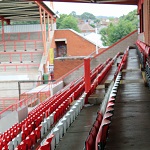 It is going to be another good challenge. They (Hull) are going to be a good team as they were promoted last season and they are now in the Prem. That is the point of the cup games to get these big teams and have these big games, so we are really looking forward to it.

McCready also thinks a boisterous home crowd could play a huge part in cheering the Grecians on to victory:-

I think home advantage will be massive, to be honest,” he said. “Don’t get me wrong, we are still going to be the underdogs as we are playing against a Premier League team, but we are confident whoever we play against that we can get a result. It is important we put on a good performance at home as well because we want the fans to be coming in big numbers throughout the season.

Previous: More than £1,000 for Adam Stansfield Foundation by Supporters Football Match
Next: Next Up: Accrington Stanley vs Exeter City