Exeter’s sponsorship by Flybe has been extended a further two years. The regional airline is based at Exeter airport, and has a solid relationship with the Club and players and often flies them around the country.

It’s the longest sponsorship deal in the Football League, starting in 2003 when we went in to the non league, and now in its 14th year. With Exeter being feature on the TV, such as the two live cup ties with Liverpool last year, their sponsorship of the shirt has seen huge coverage.

We are delighted that Flybe are backing us again for another two seasons. This is one of the longest standing corporate sponsorship for a current Football League Club and underpins Flybe’s dedication to the Club.

It is great to still have such a household name proudly displayed on the front of our kits and we are looking forward to a successful season for both City and Flybe. 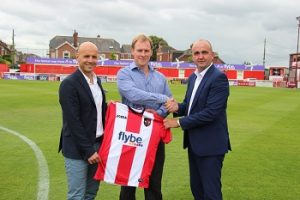 I would like to thank Flybe for their continued support; the longevity of their sponsorship has been vital in enabling our community owned club to become stable and to grow over the years.

Flybe is proud to be extending our relationship with Exeter City for another two seasons. We have enjoyed a fantastic relationship with both the Club and the fans over the past 13 years and are looking forward to continuing that into the future.