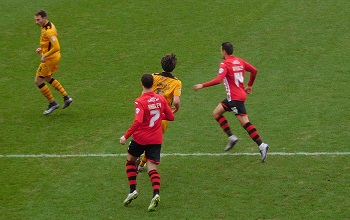 After City’s excellent pre-season, a 2-0 opening day defeat at crisis club Blackpool was something of a damp squib – City will need to learn quickly that you have to put the ball between the posts rather than hitting them – but there is a chance to make amends in a cup encounter against Championship opposition who saw their own optimism dashed by a losing

trip up north. City went into the opening fixture with several players either injured or doubtful, fortunately Lee Holmes and Jordan Moore-Taylor emerged unscathed but the same couldn’t be said for Troy Brown who will hopefully recover in time for Tuesday night especially with his fellow Troy, the returning Archibald-Henville, missing altogether from the squad on Saturday. Tom McCready was fit enough only for the bench but may step in on Tuesday if Brown isn’t fit with Moore-Taylor ready to move back into the centre and Craig Woodman taking up his more usual position of left back.

Brentford, a side City have played frequently in the past (and indeed the Bees were the opposition for City’s first ever Football League match in 1920, City running out 3-0 winners that day), are now in their third season in the Championship and will hope to have learned from the mistakes of last season where they replaced their successful English manager with a Dutch one one who was altogether less successful before returning to Blighty to pick up Dean Smith from Walsall. Smith has been forced to sell a couple of his club’s stars this summer in Jake Bidwell and David

Button, but has augmented this with signing the likes of Daniel Bentley, Southend’s highly rated stopper. Up front Scott Hogan has returned to full fitness after a horrific injury and will hope to kick-start his Brentford career after his successful spell at Rochdale. Brentford’s opening day trip to Huddersfield saw the Bees return pointless after a 2-1 defeat, so Smith, like Tisdale, will be hoping for an immediate response.

City and Brentford have, over the years, played each other frequently, the most recent occasions being in the 11/12 relegation season. Brentford managed to do the double over City that season – a 2-1 win at the Park – a James Dunne OG and Clayton Donaldson for the visitors before Guillem Bauza reduced the arrears from the spot. It was a young loanee by the name of Saido Berahino (whatever happened to him?) who notched both goals in the return, although the match will also be remembered for a red card for David Noble – a decision which the referee has since admitted to your writer that he got wrong – although it probably made little difference to the eventual outcome as there was a clear gulf in class that night. According to Soccerbase this is the first time the sides have met in the League Cup in all its guises, Brentford do enjoy, however, a healthy head to head lead in Football League matches with 44 wins to City’s 25 (19 draws).

The bookies are backing Brentford. The tie will be decided on the night with penalties if necessary. Exeter are 12/5 for the win and Brentford are 6/5.

Previous: Match Officials: Exeter City vs Brentford
Next: Tickets for the Argyle game now on sale