Exeter City have confirmed that striker Liam McAlinden has signed for the club on a two-year contract following his release by Championship side Wolverhampton Wanderers.

The 22-year- old frontman left Wolves this summer after spending the last couple of months of the 2015/16 season on loan at Crawley Town, following a short stay at League 1 Shrewsbury Town earlier in the campaign.

After nine years in the academy at Molineux, Liam turned pro with Wolves in 2010, and would play a part in the club’s League 1 title-winning season in 2013-14, scoring his first senior goal in the Football League Trophy against Walsall before a first league goal in a 1-0 win at MK Dons.

His Football League pedigree was fleshed out with two loan spells at Shrewsbury Town either side of a further two temporary spells with Fleetwood Town.

Though he was born in Cannock, Staffordshire, Liam represented Northern Ireland at under-21 level (qualifying through his grandfather) before switching allegiance to the Republic of Ireland, thanks to his parents, in 2014.

It was what I needed, to get it all done early in the summer. It’s all sorted now, and I’m looking forward to 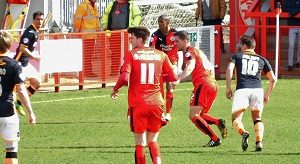 I’ve been out on loans, but they haven’t always worked out as I would have expected. It’s pleasing, though, to find a new home; it’s going to be a great experience for me, and I’m really looking forward to it. It was close in January – I was nearly coming here on loan, and things didn’t quite work out, but as soon as it came about that I was going to be available on a free in the summer, we got back in touch, and we’ve got it done as soon as we could. I’m delighted.

City were probably one of the best teams that I came up against while playing for Crawley – they got the ball down, passed it through us and caused us problems. Now I want to score as many goals as I can; I’m a goalscoring centre-forward who likes to get behind a defence. I’m quick and I’ve got good movement, and I’m hoping that playing in a good footballing side will get the best out of me. The manager knows how to get the best out of players, and I’m really looking forward to working with him.

We’ve been interested in Liam for a couple of years, as we received good reports on him playing for Wolves reserves. We’ve kept an eye on him since then, and we very nearly took him alongside Jayden Stockley towards the end of last season, but for one reason or another that didn’t come off. We know what he’s got and what he can bring to the team, and we feel that he can be an energetic force at the front for us. We’re looking for energy up front, and Liam fits the bill perfectly.