It was announced in March that Johnstone’s Paint will no longer be sponsoring the Football League Trophy. No announcement has yet been made as to a replacement for a trophy that takes two teams from League 1 and League 2 to 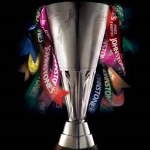 Wembley for the final. This year’s final was on by Barnsley, winners over Oxford United.

The Trophy in the past has also been known as the LDV Vans Trophy, the Auto Windscreen Shield Sherpa Vans Trophy, Leyland DAF Cup, Autoglass Trophy and the Freight Rover Trophy.

On behalf of League One and League Two clubs, I would like to thank Johnstone’s Paint for 10 years of committed and very loyal partnership. This competition has flourished during their time as sponsor. We wish Johnstone’s Paint every success in the future and we now begin looking for a new partner for the 2016‑17 season and beyond.

The draw normally takes place on the first Saturday in September.

Previous: The FA Tinker with the Cup
Next: Liam McAlinden joins up with Exeter City