While a 0-0 draw with the team now officially the division’s champions was a creditable result which extended City’s unbeaten run into double figures, it hasn’t done City’s playoff hopes much good as AFC Wimbledon’s victory has put the Londoners firmly in the driving seat.

With that in mind City face another midweek home examination against a side that is probably too far off the pace now to challenge but has recorded back to back victories. Lee Holmes missed the draw with Northampton and Paul Tisdale will hope he is ready, if not Alex Nicholls is likely again to deputise, while the side elsewhere is starting to show signs of settling down – one question mark may be over whether David Noble is fit to play multiple games in a week, Arron Davies may feature if Tisdale decides not to risk Noble.

It hasn’t been the most exciting of seasons for Mansfield, with the Stags never really having troubled the scorers at either end of the table. Possibly one area that has prevented Adam Murray’s side from progressing into genuine contenders has 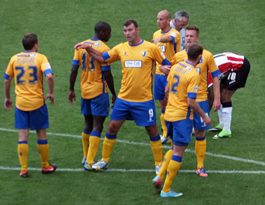 been their form against sides in the top half – their 2-1 win at Carlisle the Saturday before last was their first win against a top half side all season. This was, however, followed up by a 5-0 thumping of near neighbours Notts County, so Mansfield have some good form going into the long trip to Devon. Tormenter in chief was one time Torquay striker Matt Green with a brace to take his tally to 16 for the season after returning to the club following an unsuccessful spell in the Championship with Birmingham. Reggie Lambe is another to watch while the Stags can call on plenty of experience in goal with 35 year old Scott Shearer preferred currently to 40 year old Brian Jensen.

City were victorious on the road at Field Mill in another midweek fixture back in November, first half goals from Grant and Holmes sealing a 2-0 win. Last season’s match at the Park saw City’s home woes continue with a 2-1 defeat – goals from Bingham and Bell put the visitors 2-0 up in the first half before Matt Grimes replied in the second. City enjoy a slight head to head lead in Football League fixtures with 21 wins to Mansfield’s 19 (17 draws).

Previous: All to play for as Exeter City’s season reaches conclusion
Next: Ollie Watkins is the Football League Young Player Of The Month