With the 2015/16 season now very much in the home straight, City look to continue their current form against a side which sealed promotion last week and whose unbeaten run is even longer than City’s. Paul Tisdale was able to give David Noble a start in the win over Yeovil and, with Matt Oakley still out, Noble’s return was very timely indeed. Otherwise the 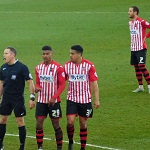 team is starting to pick itself, with one other question mark over whether Christian Ribeiro returns to the side after being relegated to the bench last week or whether Jamie McAllister continues at right back.

The season has been something of a soap opera for Northampton mainly thanks to off-field shenanigans involving a missing £11 million and a half-built stand, but on the pitch the expensively-assembled Cobblers squad has been moulded into a team which has steamrollered its way to a runaway lead in League Two and promotion was clinched last week with a 2-2 draw against Bristol Rovers, their third successive draw. 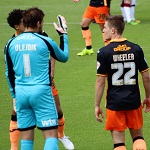 taken over by his former paymaster at Oxford – it says something for the financial clout afforded to Wilder that when Marc Richards was struck down with injury they were able to replace him with the top scorer from a club in League One in James Collins. Collins has notched seven times since moving from Shrewsbury, while John-Joe O’Toole has 11 goals from midfield. One time City loanee Lawson D’Ath is likely to feature if possibly from the bench.

In order for City to extend their unbeaten run into double figures they’ll have to turn around recent form against the visitors which has seen four straight victories for Northampton. The reverse fixture back in August was a routine 3-0 win for the champions elect through Taylor, Cresswell and Richards, while the last time Wilder’s side made the trip to Devon they took the points with a 2-0 win (Richards and O’Toole). The Cobblers have a big head to head lead too in Football League matches with 47 wins to City’s 28 (28 draws).