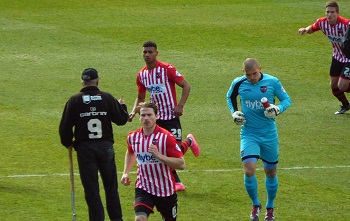 To win the Devon Derby is always a fillip, to win it with two long range efforts from your latest wonderkid in the last ten minutes having been under the cosh for much of the game puts it up there with the all-time great days such as 1993 or

effectively relegating Plymouth in 2011. The late win ensured City’s unbeaten run is now eight matches and Paul Tisdale’s side goes into the second of three fixtures against local sides in April in touching distance of the top seven. One downside to the win last week was Matt Oakley pulling up injured early on as Tisdale admitted the gamble he took on the veteran’s fitness didn’t pay off, so Arron Davies or, if he’s considered fit enough after his cameo last week, David Noble will expect to step in. Another selection poser will be whether Jake Taylor or David Wheeler starts – the latter’s form since returning from injury hasn’t been as strong as he’d like while Taylor has made the case for a regular start with some fine performances recently. Jordan Moore-Taylor missed out again last week and will hope to be

close to a return on Saturday.

If you had said at the turn of the year, when Yeovil had recorded two league wins all season to that point and were looking odds-on for a third successive relegation, that a win against City could guarantee their safety in the division for another year, their supporters might have asked for some of what you were on. However, the replacement of the experienced Paul Sturrock with the untested Darren Way proved to be something of a masterstroke as Way made his Glovers side very difficult to beat and has been rewarded this week with a three year contract. A solid defence in front of ex-City keeper Artur Krysiak has kept eight clean sheets in their last nine games, the foundation of Way’s success after Sturrock presided over a defence that leaked like a sieve. A

regular goal scorer has been an issue, although currently if they score one they tend to win so that need is negated somewhat – there is plenty of experience with the likes of Leroy Lita and Francois Zoko, although it is late bloomer Ryan Bird who is top scorer with eight.

Yeovil were the visitors for the opening game of the season and left pointless after a 3-2 reverse. City were 2-0 up at the break through a Nichols penalty and Wheeler, but Yeovil pulled it back to 2-2 through a goal from 90s crooner Harry Cornick and a penalty from Matt Dolan before Will Hoskins came off the bench to score on his debut. City’s last visit to Huish Park in late 2011 ended 2-2 (Upson and Blizzard sandwiched efforts from Jake Taylor and an O’Flynn penalty). Honours are even in the Football League with two wins apiece (three draws). 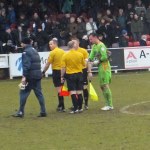 Stephen Martin has refereed 6 Exeter game in recent years, see here, including the home defeat to Wycombe back in September.

The last time we played Yeovil Town at Huish Park was in November 2011, match details here.

Previous: Ollie Watkins in the Football League Team of the Week (again)
Next: Match Officials: Exeter City vs Northampton Town