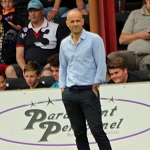 Exeter City boss, Paul Tisdale,  has been nominated for the Sky Bet League 2 Manager of the Month award for March along with Bristol Rovers’ Darrell Clarke, Hartlepool United’s Craig Hignett and Yeovil Town’s Darren Way. The winners will be announced on Sky Sports News on Friday 8th April.

City remained unbeaten throughout the month, and a haul of twelve points from six games which included a 100% record on the road, with wins at Cambridge United, Notts County and Crawley Town.

This is the second time that Paul Tisdale has been nominated for Manager of the Month this season, and coincides with an unbeaten run stretching back to the victory over Stevenage on February 27th.

Previous: Tisdale’s Record Against Plymouth Argyle
Next: Ollie Watkins in the Football League Team of the Week (again)