For the second week running Ollie Watkins appears in the Football League’s team of the week. This time for his heroics in the Devon Derby against Argyle. Exeter City won with a brace from Watkins, the first was on 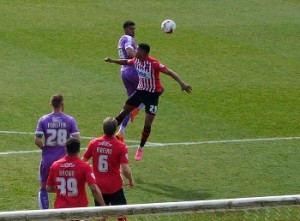 80 minutes and went under Luke McCormick and in to the net, the second was in added time and involved Ollie taking on a number of Argyle players before firing in to the top corner in front of a delirious Big Bank. No luck in making that goal, a winning goal, one of the most beautiful goals to be scored in a game against Plymouth Argyle at St James Park.

The Football League has this to say about Ollie’s performance

Watkins was on fine form during March but his performance in the Devon derby at the weekend topped the lot.

The 20-year-old fired a brace as the Grecians fought from a goal down to defeat rivals Plymouth Argyle, with his last-minute winner one to remember.

The full team for the past weekend is:-

Last week Ollie  was voted, by fans, as the PFA’s March League 2 player of the month. The 20-year-old now has 7 goals to his name in just 16 appearances.

Previous: Paul Tisdale Nominated for League 2 Manager of the Month for March
Next: Next Up: Yeovil Town vs Exeter City