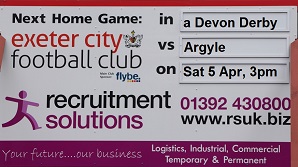 The Devon Derby is always first on the list to check when the fixture list is issued each summer, and the latest edition promises to have more riding on it than most as both clubs need a win to bolster their respective positions with regard to either making the playoffs or going up automatically. City moved back into the top half and just five points from the dotted line marking seventh place with a comfortable 2-0 win at Crawley on Easter Monday, and Paul Tisdale as always has some interesting selection headaches – Jake Taylor repaid the faith shown in him by bagging a goal and performing superbly, while Jamie McAllister was a very late addition to the side in an unfamiliar right back role, although he is expected to make way for the man he replaced, Jordan Moore-Taylor. Arron Davies was another player bolted into the starting XI on Monday and would consider himself very unlucky to be jettisoned after a solid performance.

Plymouth, after a recent wobble that saw them pick up one point from four matches, enjoyed a return to form over Easter picking up a maximum six points from wins over Morecambe and York. Derek Adams has utilised the loan system to somewhat ridiculous extremes, actually having to drop players (such as ex-City striker Daniel Nardiello) because he has too many loanees in his squad – something that perhaps calls into question the system itself. He has been bolstered by the return of yet another loanee, Hiram Boateng, who enjoyed a successful loan spell earlier in the season before returning to Crystal Palace, while Fleetwood’s Jamille Matt opened his 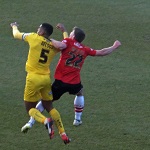 account for the club with goals in both of the Easter fixtures. Reuben Reid was also on target against York, his 50th for the club but crucially his first in 14 matches. Jake Jervis is, however, the leading scorer with 12 in all competitions. One former City player likely to feature will be Gary Sawyer, who enjoyed a successful loan spell including the 0-0 at Old Trafford during City’s time in non-league.

Saturday’s match marks the third instalment (any bets on either one or two more post-season?) of the Devon Derby this season – Plymouth were comfortable 2-0 winners in the JPT (Boateng and Tanner) but City won the league fixture at Home Park 2-1 thanks a brace (one penalty) from Ryan Harley, Threlkeld pulling one back for the hosts in the second half. A Reuben Reid hat-trick (Davies for City) ensured a derby day to forget for City in the fixture at the Park last season. It is the Pilgrims who have a healthy lead in the Football League head-to-head with 27 wins to City’s 18 (20 draws).

Details of the L2 match earlier this season at Home Park http://www.grecians.co.uk/wordpress/?sp_event=4095