After a poor run culminating in the 4-1 humiliation by Oxford, a win is a win is a win, and even if it was by all accounts somewhat undeserved the 2-0 victory at Stevenage on Saturday will have done City’s confidence the power of good going

into yet another midweek fixture against a side with arguably more to play for, although the win at the weekend coupled with defeats for teams in the playoff zone prior to Saturday will have kept open the faint possibility of a late surge. As is his wont, Paul Tisdale made a raft of changes to the line-up, leaving out the likes of Troy Brown and Jayden Stockley – the latter sufficiently wounded to leap off the bench to score both goals, but perhaps the best news was the return of David Noble, whose presence was sorely missed in the six weeks or so he was out. Stockley will hope his cameo was strong enough to restore him to the starting line-up against a side he played for earlier in the season while Noble was withdrawn early perhaps with Tuesday night in mind.

With Portsmouth now debt-free and in supporter ownership, there was a massive sense that the biggest club in the division would stroll to success, especially after the astute appointment of Paul Cook as manager. Things haven’t quite gone that way though although Pompey are back in the playoff zone after a win over Cambridge at the weekend. 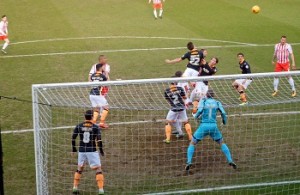 Consistency has been a major issue, with just three wins in 2016 so far, and no away wins since a 2-1 defeat of now runaway leaders Northampton before Christmas represents a worrying trend. Consistency of selection seems to be a cause too, with 35 players used so far. The two former City stars in the Portsmouth roster, James Dunne and Paul Jones, are both currently out on loan, while the main goal threat is likely to come from Mark McNulty, whose second career after that of a Zimbabwean golfer seems to be proving a success with eight goals in just 16 league appearances. Adam McGurk is another key player, while Gareth Evans also has eight goals to his name.

Tuesday night represents the third (all midweek) encounter between the sides this season, with City

have enjoyed two wins so far. The JPT in September saw City emerge victorious 2-0 (Harley pen and Alex Nicholls) over a very inexperienced Pompey side which was prepared to take the hit of a Football League fine for fielding an understrength side otherwise in accordance with JPT rules. The reverse league fixture saw City go 2-0 up through Wheeler and Davies and survive a Portsmouth onslaught before a controversial goal right at the death from Gary Roberts after the referee failed to spot a clear handball ensured a nervy finish. That was only City’s third win in Football League encounters, with Portsmouth recording 11 (seven draws).

Previous: Match Officials: Exeter City vs Portsmouth
Next: Next Up: Cambridge United vs Exeter City