The 2013/14 season saw City have to pare the squad down slightly due to cost-cutting, meaning no room for the impressive Kevin Amankwaah, while Jamie Cureton was gone too. Steve Tully was another high profile casualty, his 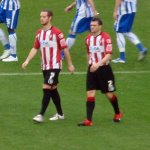 dithering over whether to accept reduced terms led to the offer being withdrawn. The only signing of note was that of David Wheeler, a player who continues to star in City colours today. Early signs were mixed with a distinct lack of consistency, before City’s direction of travel was marked out, after a stunning 4-0 win away to promotion chasing Scunthorpe, with three wins in 25 league games stretching from late October until late March. The mercurial Alan Gow had departed for Bristol Rovers, although while he was busy suffering a long term injury the player City got in return, Elliot Richards, played a leading role in the club’s comparative upturn in fortunes late on. Although City’s form wasn’t that much better as the season drew to a close, a 3-0 win over Fleetwood and a 2-1 win in the Devon Derby at Home Park sought to put some daylight between City and the bottom, but it wasn’t until the penultimate round of games that City could at last begin to breathe easily. The visitors were champions elect Scunthorpe, but while the visitors would end the day celebrating the title, it was City, through a piledriver from unlikely

scorer Craig Woodman and a clincher from Jimmy Keohane, who won the game and could also celebrate – a stunning 2-0 win by a virtual youth team (which had done so well in the U21 cup, beating the likes of Crystal Palace and Southampton) at Hartlepool that saw City eventually finish 19th. Another cause for celebration was the emergence of a mercurial talent in the middle of the park – 18 year old Matt Grimes had broken into the first team and ended the season as Player of the Year.

What was apparent, however, was that City were in desperate financial straits. A disastrous hike in Season Ticket prices, allied with a confusing new pricing structure that effectively priced out casual supporters as well as behind the scenes turmoil, contributed towards City needing to go cap in hand to the PFA to pay the wages in the month where Season Ticket revenues should have been at their most buoyant. With efforts also going towards City’s impending trip to Brazil 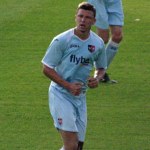 to mark the centenary of Brazil’s first ever match against the Grecians, eyes appeared to have been taken off the ball. Gone were the CEO and Chairman amidst a political struggle at the Trust, and City faced the 2014/15 season with a threadbare squad and unable to sign players due to a transfer embargo following the PFA loan. This was not to make mention either of the Danny Coles saga which saw the veteran defender booted out to Forest Green after a series of online indiscretions. Eventually the loan was paid off and City were able to sign Christian Ribeiro, Alex Nicholls and a more experienced 1931 player than usual in Graham Cummins. The cost cutting saw City part company with Rob Edwards and Matt Gill, who headed north to take charge of Tranmere, taking Elliot Richards with them.

Given the turmoil, added to by a sickness bug picked up in Brazil, it was “make do and mend” at first as a depleted City

(Paul Tisdale forced to name himself on the bench for the season opener against Portsmouth) went without a win in their first seven matches before breaking their duck with a 2-1 win at Cambridge, which was the first of four straight wins. City began to prove adept at defeating teams at the top of the table, recording 2-1 wins against both Bury and Wycombe when they were at the summit, while there was a sweet moment for Tisdale in winning 2-1 at Edwards’ Tranmere, as if to riposte to those fans who suggested Tisdale should have been out of the door in favour of Edwards.

City’s financial position continued to cause headlines, the TV revenue from the humiliating 1-0 defeat at lowly Warrington Town conversely staved off the threat of another PFA loan, indeed allowed City to clinch the re-signings of Ryan Harley and David Noble and veteran striker turned TV pundit Clinton Morrison. There were, however, 1.75 million reasons to be grateful that City maintained an excellent academy structure at the turn of the new year as Matt Grimes

went to Swansea for a fee that smashed the club record and in fact was a record for the fourth tier. This allowed Tisdale to strengthen further with the likes of Lee Holmes coming in to help bolster City’s faint playoff hopes. Tom Nichols had started to justify the plaudits too with 15 league goals as he became a leading light in City’s line-up.

City would suffer the obligatory loss of form with four straight defeats before ending the season with a 2-1 win over Dagenham & Redbridge to finish 10th albeit fully seven points outside the playoffs. Given City’s plight in pre-season, to finish 10th would surely have been considered an overachievement although there was disappointment that City, in an infinitely better position off the pitch in the second half of the season, failed to push on and home form was once again a major cause for concern. The signings made were, however, largely lauded with Ribeiro picking up the Player of the Year award and, with Ribeiro and Holmes eschewing

the advances of teams higher up the pyramid to commit to City for another season, there was a huge sense of optimism going into Tisdale’s 10th season in charge.

One has to say, however, that the optimism has faded somewhat as a City side that has been ravaged by injury throughout has failed to live up to expectations. There have been some major bright spots – most notably of course the cup runs that saw City almost beat Liverpool in the FA Cup 3rd round before a comprehensive 3-0 defeat in the replay at Anfield, while the League Cup also saw City overcome higher level opposition in Swindon before scoring three at Sunderland (sadly conceding six!). Tom Nichols, once again leading the line with aplomb, completed a big money move of his own to Peterborough in January. The playoffs look distant currently, but there’s always a feeling that if City can finally establish a settled side they are more than a match for anyone in the league, it is up to Tisdale, as he reaches 500 games in charge, to manage a late charge up the table. Given how he has handled various travails over the years and come out fighting, you can be sure he’ll give it a damn good try.

Previous: Tisdale’s 500: What Goes Up …
Next: Next Up: Stevenage vs Exeter City