City’s winning run came to an abrupt end at a familiar foe thanks to a stunning goal that livened up an otherwise relatively dreary encounter. Having enjoyed a week off after last week’s match was postponed, City were able to give a start to David Wheeler, while Ryan Harley and Jordan Moore-Taylor were on the bench, although there was no place for

David Noble, perhaps Paul Tisdale preferring to keep him back for the visit to struggling York on Tuesday night. The side was, therefore: Olejnik in goal, full backs McAllister and McCready, with Brown and Ribeiro centre backs; a midfield of Butterfield, Nicholls and Watkins, with Grant, Wheeler and Stockley up front. On the bench were Hamon, Moore-Taylor, Tillson, Harley, Oakley, Holmes and Taylor.

City, perhaps mindful of recent trips to Wycombe that saw the home side take an early lead then produce disgraceful displays of gamesmanship, took the game to their hosts early on and threatened to create several opportunities for themselves – Stockley has proved a real handful both on the air and on the deck since his arrival on loan from

Bournemouth and he had the first decent opportunity, heading wide when well placed, and he again would hope to have gained more purchase on his shot on the turn that trickled through to his Cherries team mate Ryan Allsop. At the other end most of Wycombe’s best work came via Paris Cowan-Hall, although Olejnik in the City goal was rarely tested and commanded his box well.

Ollie Watkins, relishing his return to the side, was a marauding presence down the left, and one fine run from inside his own half produced a shot that went over the bar, while after Grant’s initial effort was blocked Wheeler scuffed a shot well wide. In another incident Wheeler fell in a crumpled heap on the floor, but with City supporters’ hearts in their mouths anticipating another spell on the sidelines he eventually emerged seemingly unscathed. Right on half time City thought they might have a shout for a penalty as Stockley was bundled over in mid air on the corner of the box, but from 120 yards away and with a biased hat on it’s easy to make these calls on behalf of the officials! 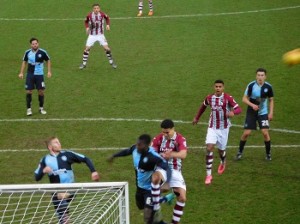 City will therefore have been somewhat disappointed to go into the break all square having edged proceedings, and will have been more disappointed still to go behind early in the second half. There appeared to be no danger as Stephen McGinn picked up the ball thirty yards out, but as he let fly the fans behind the goal at the opposite end were silenced as they knew his speculative effort was flying into the top corner for what must surely be a goal of the season candidate for the Chairboys.

City will also have begun to fear the worst in terms of the tempo of the game, and sure enough the gamesmanship started with Wycombe players starting to go down with regularity, although Mr Webb, the referee, was quick to clamp down on this and repeatedly told the players to stop messing around and get up. Throw ins also took an age while gallingly even the very youthful ballboys were clearly briefed, a couple of times throwing the ball away from the player waiting to take the throw, but by no means was the gamesmanship anything like as bad as in previous seasons – credit must go to the referee who was excellent throughout.

In the midst of all this City did press for a time immediately after the goal, but as the tempo was broken up so too did City begin to lose their shape and for the most part if any side looked like scoring again it was Wycombe – Olejnik had to be alert to save on a few occasions, while near the end Cowan-Hall, given the freedom of the edge of City’s box, couldn’t

get the ball to sit in order to get a decent shot off. At the other end City mostly found Wycombe’s defence to be exceptionally well organised, particularly Aaron Pierre who was a colossal presence while Marcus Bean in front of the defence was also in great form. City’s best opportunity came from a corner – Troy Brown, who’d headed the ball about 150 times at the back, once again got a header in but it went down into the ground before bouncing over the bar.

With five minutes of injury time added on – partly due to the regular breaks in play but mostly due to the referee himself having pulled up lame briefly, City’s supporters urged their side on. Just like at the end of the first half City thought they had a shout for a penalty – a throw in saw Brown barged in the back as he tried to flick on, an offence that anywhere else on the pitch would be a free kick but they never seem to be given as penalties, while the final whistle 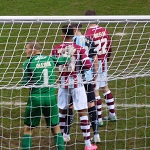 came just as it appeared substitute Jake Taylor had broken clear on goal, although in truth the Wycombe defender probably heard the whistle and stopped playing as he was about to intercept.

Unlike the last couple of seasons there was less resentment in general about the hosts and their play, with most acknowledging that in an even encounter their goal was worthy of being the winner. City may feel hard done by that an industrious performance, particularly in the first half, went unrewarded, but aside from a couple of fine saves the home keeper wasn’t tested enough, and if you don’t hit the target you won’t win – Wycombe managed to do it once, City didn’t. There were decent displays from both sides, City wouldn’t look at any of their players and say they performed necessarily below par but Wycombe, as displayed by their excellent defensive record, were exceptionally well organised at the back particularly in the second half after City’s attacking line up had tested them severely in the first half

. While McGinn was given the MOM award by the home sponsors thanks to his goal, the hosts’ Pierre and Bean were probably their standout players, while your reporter would suggest Troy Brown as City’s MOM for reducing Paul Hayes to a virtual spectator – if only he’d just kept that header on target!

A word again also for the referee, Mr Webb – all too often your reporter has bemoaned feeble officialdom particularly at the home of gamesmanship, but he kept it in check well throughout which perhaps convinced the hosts to keep playing even after scoring, an excellent display that should be shown to a number of other referees at this level.