It is probably just coincidence allied to a lack of fit midfielders, but since the FA Cup draw was announced, City have embarked on a run of four matches which have all ended in defeat. What better way to turn things around than in front of the BBC TV cameras against one of the biggest clubs in the world? The treatment room which has been full to bursting for the last couple of months may mysteriously be slightly emptier this week as the injured players bust a gut to be fit for 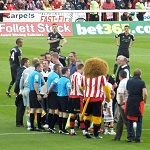 Friday night’s match – Christian Ribeiro and David Noble have both made strides towards full fitness while David Wheeler is another who will be desperate to feature. Troy Brown made a welcome return to the starting line-up against Dagenham last week while Manny Oyeleke and Tom McCready have also made it as far as the bench in recent games.

The FA Cup is one of Football’s great levellers. Liverpool, now under the management of the colourful Jurgen Klopp, are used to playing at the great stadiums of the game, yet thanks to the so-called “magic of the cup” they find themselves slumming it at the home of a mid-table League Two side while in the middle of their own injury crisis, particularly in defence. Tuesday night’s win at Stoke in the Capital One Cup merely added to the injury woes with the likes of Coutinho and Lovren now set to miss Friday night’s match. Klopp may use the match to blood some of his younger players in order to keep them fresh for what may be considered more important upcoming fixtures against Manchester United and Arsenal (as well as the second leg of the Capital One Cup semi), which may add to the optimism of the packed home ends even if it is disappointing when the household names don’t feature.

While this is obviously a massive fixture for City, with the club’s marketing department going into overdrive with commemorative scarves and mugs, it is one whose last occurrence didn’t take place too long ago – in fact as recently as 2011/12 Liverpool made the trip down to Devon in the second round of the then Carling Cup, a match again televised and which saw the more illustrious visitors come through unscathed with a 3-1 win which was perhaps not nearly as close as the scoreline suggested – Luis Suarez, Maxi Rodriguez and Andy Carroll saw Liverpool lead 3-0 only to be pegged back by a late penalty from Daniel Nardiello.