A maximum six points from two away trips in the last week to sides above them in the table has seen City go into Saturday’s match with Bristol Rovers with a real sense of momentum. The injury list is gradually easing

with Lee Holmes having started at Mansfield and Craig Woodman having come off the bench meaning Paul Tisdale has more options at his disposal should he wish to freshen up his side.

After a solitary season in non-league purgatory, Bristol Rovers have made a decent if somewhat inconsistent start to life back in the Football League and currently sit in 13th place with eight in both the win and loss column. Darrell Clarke’s side has lost four in their last five in all matches including a 1-0 humiliation at home to Chesham United in the FA Cup, and their 2-1 home defeat to Stevenage on Tuesday night saw City move above them. Their away form has, until the last couple of matches, been what has kept them in mid-table with the Gas having won six away games already. One player who will be desperate to feature is Jake Gosling, the former City winger (and Gibraltar’s all-time leading goalscorer!) has, however, been a peripheral figure of late and didn’t even make the bench on Tuesday night. The biggest goal threat is undoubtedly Matty Taylor who has 10 goals in all competitions to his name having scored 20 last season. Rovers have recently signed ex-Plymouth man Paris Cowan-Hall on loan and he’s another who will need to be watched closely. 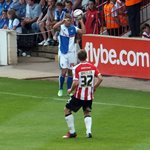 The last time the sides met was in the 2013/14 season, when both matches finished 2-1 to the home side. The opening fixture of that season was at the Park, where after a goalless first half two players scored against their former sides – Danny Coles opened the scoring for City, Elliot Richards equalised only for Sam Parkin to fire home the winner on his debut. Rovers got their revenge in January – after a Lee Brown Own Goal gave City the lead Rovers came back with a brace from John-Joe O’Toole, the winner coming deep into injury time. The sides are level in the Football League head to head with 25 wins apiece (26 draws).