A change of formation, a change of personnel up front and a most unexpected Devon Derby victory at Home Park means Paul Tisdale and his City side are in positive mood ahead of a Tuesday night trip to take on a Mansfield side that itself was boosted by ending a recent poor 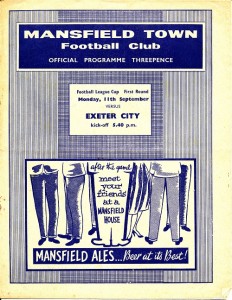 run with a win at the weekend. Injury woes continue with Jamie McAllister having limped off after only 11 minutes of Saturday’s match while Danny Butterfield was replaced at half time, although given the returning Ribeiro and Oakley replaced them this represents good news for Tisdale as well as the overworked medical staff. Lee Holmes too made it to the bench on Saturday and will be hoping to play some part at Mansfield, while the performances of comparative rookies Jamie Reid and Ollie Watkins will have given Tisdale a selection headache as both made strong cases to retain their place.

Mansfield, after a poor campaign last time that saw them finish 21st after losing eight of their last nine matches, weren’t expected to pull up any trees this season either, but Adam Murray’s Stags have improved markedly to sit in 6th place in the table going into Tuesday night’s fixture. The concertina effect of the table is such, though, that City in 13th could actually overtake Mansfield, although such is the discrepancy in goal difference that it would require a 6-goal victory! One thing also to note is that Mansfield’s victories this season have all come against sides struggling near the foot of the table (Crawley have since recovered to 14th), with results against the leading sides somewhat less impressive. The one to watch will undoubtedly be Matt

Green, whose lethal touch in front of goal in his first spell at the club – 54 league goals in two seasons in the Conference – earned him a move to the Championship with Birmingham which didn’t work out and he finds himself back at Mansfield and leading the charts with six goals to his name. Adi Yussuf has yet to start a match in the league this season yet has three goals to his credit including one in Saturday’s win over Hartlepool.

Last season it was away sides coming away with the spoils – the corresponding fixture saw City edge a thriller 3-2 – City took the lead through Tom Nichols, only for Kee and Oliver to put the hosts ahead before a late comeback through Scot Bennett and Alex Nicholls from the spot. This was revenge for the 2-1 reverse at the Park in September as Bingham and Bell put Mansfield 2-0 up before Matt Grimes reduced the arrears in the second half. The Football League head to head sees City just ahead with 20 wins to Mansfield’s 19 (17 draws).