Sunday is the televised League 2 game between Exeter and Stevenage. An early kick off for the TV, at 12.15. Tickets are as normal, from the ticket booths for everywhere except the Big Bank terrace where pay on the gate is available. 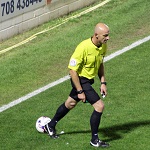 The 50-year-old referee hails from Wilsthire and is on the Premiership list. He’s taken charge of 21 Exeter games

Previous: Next Up: Plymouth vs Exeter (JPT)
Next: Next Up: Exeter City vs Stevenage