With City having been brought down to earth at Accrington last Saturday, laying to rest a recent exemplary defensive record by shipping four goals, Paul Tisdale will be hoping his charges return to winning ways at home on Saturday against another of the division’s high fliers. Injury problems appear to be mounting with McAllister and Harley missing the trip north last 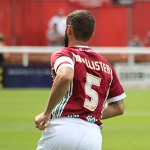 weekend, Tisdale will be hoping both are fit to return, while Will Hoskins is unlikely to be in consideration just yet. Jordan Moore-Taylor, however, returned to the bench for the last match and City’s poor defensive performance may enable Tisdale to slot his young star back into the side.

When Wycombe missed out in the playoffs to Southend last season with a plethora of loan signings in their side, most pundits were convinced that campaign would turn out to be a bit of a flash in the pan, but the Chairboys’ start has confounded the critics and Wycombe go into the visit to City lying in fourth place in the table having suffered just one defeat so far. Gareth Ainsworth has enjoyed plaudits in the media and in High Wycombe, even having a bus named after him, if not amongst the fans, players and management of other clubs for his club’s cynical style which sees games regularly lasting over 100 minutes due to timewasting, but while it produces results and while referees don’t clamp down on it the cynical play will continue. Key to their success once again has been a mean defence in front of goalkeeper Matt Ingram which has seen just five goals conceded so far, while goals have been shared around, with QPR loanee Michael Harriman one of three players to have netted twice so far. One other signing this season was Luke O’Nien from Watford, a player City were reportedly also tracking this summer.

It was a tale of two 2-1 home victories last season – Wycombe were top of the table when they visited City on a Tuesday night in October and took the lead through Peter Murphy, only for City to storm back with goals from Wheeler and Bennett. The 2-1 reverse at Adams Park in April saw Sam Saunders again give the Chairboys an early lead, City equalised through Sercombe only for Paul Hayes to score the winner some time on Wednesday morning from the penalty spot to give Wycombe reward for such vigorous timewasting that the referee added fully 12 minutes of injury time. Overall the Football League head to head is totally equal, there having been four victories apiece and four draws.