City’s stunning win at Swindon in the Capital One Cup first round has set up a mammoth trip to Premier League strugglers Sunderland, an occasion which promises to be massive for the travelling faithful if perhaps an unwanted distraction for the hosts. The injury picked up by Christian Ribeiro against York on Saturday may hasten the return of Jordan Moore-Taylor, 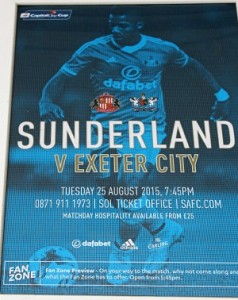 although Jordan Tillson may return to the starting line-up should Ribeiro miss out – Tillson may have returned in any case should Tisdale have decided to move Ribeiro back to the right. David Wheeler again missed out following his knock at Northampton but will be desperate to return and continue his fine start to the season, which would leave Alex Nicholls and Lee Holmes to compete for a start alongside Tom Nichols.

Having scraped to safety last season (and the season before), Sunderland have done little so far to suggest anything bar another season of top flight struggle, although there were encouraging signs in their 1-1 draw with Swansea at the weekend. Dick Advocaat, the veteran Dutch manager, has a huge task on his hands to protect both the Black Cats’ position and his own, although he may use what looks on paper to be a home banker to see what his squad is capable of, so expect the likes of exciting youngster Duncan Watmore to feature, while older hands such as Jermain Defoe will probably get the night off. That said, anything other than a comfortable win will only serve to raise the volume amongst the dissenters, so Advocaat may not take too many risks with his team selection.

Given the vast gulf between the sides, it’s not a surprise to find that there has never been a season in which City and

Sunderland have been in the same division (Sunderland’s brief stay in the third tier in the 1980s coincided with City struggling in the basement), and therefore the only meetings have been in the cups, both times being part of historic seasons for City and both occasions a replay was needed. The last meeting was in this competition in 1989/90 – City were leading 2-0 into the dying minutes only to be pegged back to 2-2, only to lose the replay 5-2 (after taking the lead). More famous was the FA Cup Quarter Final in 1931 as City of the Third Division South took on First Division giants Sunderland, drawing 1-1 in the North East before a record crowd (still to this day) of around 21,000 saw City bow out 4-2.