One of the rare black marks on Paul Tisdale’s record has been that City have failed to beat higher division opposition in a cup competition under his aegis. That was put to bed in five thrilling first half minutes as City, embarking on their first away trip in the League Cup since returning to the Football League, emerged triumphant against a Swindon side tipped for promotion to the Championship.

Danny Butterfield coming in for David Noble and Matt Oakley. This necessitated a reshuffle of the pack with Arron Davies and Butterfield in midfield and Ribeiro moving across to his favoured right back position to accommodate Tillson. So, lining up in a 4-3-3 (or 4-5-1 if you are more pessimistic!) were: Olejnik in goal, Ribeiro and McAllister full backs, Brown and Tillson in the centre of defence; a midfield trio of Butterfield, Davies and Harley, with Nichols flanked by Nicholls on the left and Wheeler on the right. The bench comprised Hamon, Woodman, Oakley, Oyeleke, Morrison, Hoskins and Reid.

If you cast your mind back to the televised League One fixture back in 2010, you will remember that City set up essentially to let Swindon do what they like with the ball until they reached about 40 yards out and a sea of defenders. Especially in the first 20 minutes of the half this was the case as Swindon’s players could barely pick their own players out amongst all the black and orange in front of them. Chances were at a premium, and the hosts found the back four, particularly Brown and Ribeiro, in inspirational form. Their frustration was evident early on with Stewart picking up a petulant yellow card for preventing a quick free kick from being taken.

As the half wore on, City started to eye up the counter attack, with Wheeler and Nicholls regularly getting in behind the back three and wing backs Thompson and Ormond-Ottewill. Ribeiro too went on a mazy run down the flank that deserved better. One crazy scramble in the City box that seemed to go on forever finally culminated in the ball being hooked to safety, while Olejnik pulled off a couple of decent saves.

City started, though, to create the better chances – Nichols held the ball up well by the dead ball line before playing in Harley whose shot lacked power but was still fumbled by Vigouroux in the Swindon goal, while Ormond-Ottewill had to be on hand to clear a scuffed Wheeler shot off the line. The respite was temporary however, as City deservedly went in front. A raking ball to the right was brought down well by Nichols, who looked up and saw Nicholls scampering off his shoulder and played it through to him. Like Moses parting the Red Sea the Swindon defence opened up for Nicholls, who finished well, Vigouroux getting his fingertips to it but not doing enough. Five minutes later and the ingenuity of Nicholls brought a second – picking up the ball near halfway he darted towards the Swindon goal, channelling his inner Alberto Tomba as he slalomed past two weak challenges before his shot was palmed away by Vigouroux into the path of Wheeler to score his second in as many games. City continued to turn the screw as the half drew to a close, another run by Ribeiro ended with a left footed shot swerving just over the bar to bring the half to a close.

As one might expect being 0-2 at home to lower division opposition, Mark Cooper presumably threw the tea cups around 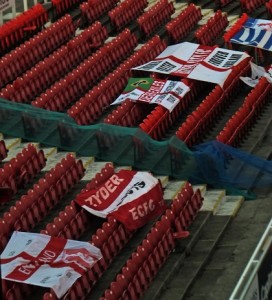 before banishing his players back to the pitch fully five minutes early. And also as one might expect, the second half promised an onslaught, Swindon trying to up the tempo while City returned to the tactic of absorbing pressure and forcing the Robins to try to play through a committed bank of black and orange shirts. Bodies were flung in the way of the ball, the number of shots being deflected wide told this story. Swindon’s supporters thought they’d pulled one back when a fierce effort from close range rippled the net from the wrong side, before one time Spurs player Jonathan Obika finally reduced the arrears on 65 minutes with a goal from 20 yards that no keeper in the world would have saved.

City tried to calm things down with a trio of substitutions as the clock ticked slowly on – first a straight swap with Oakley on for Butterfield, who had not long since produced a tired challenge that led to a booking. Next up was Woodman on for Nichols, before Nicholls made way for Hoskins. Swindon continued to press, Olejnik making a couple of routine saves while one deflected effort fizzed just the wrong side of the post with Olejnik completely wrong-footed. As the clock ticked past 90 into the four minutes of added time, Swindon were awarded a free kick on the edge of the box. As City supporters’ fingernails were being chewed frantically the opportunity came to nothing as for the umpteenth time in the match the ball was deflected out for a corner which was dealt with fairly comfortably, and that was pretty much that.

On a night of shocks in the Capital One Cup this one probably ranked fairly low on the scale, but don’t tell that to the massed ranks of Stanno-chanting away fans, who were delirious at the thought of actually progressing in a cup competition and away against (on paper) far superior opposition at that. Naturally they were heroes all. Olejnik made a number of crucial saves. Ribeiro showed Swindon what they were missing with a performance that oozed his usual class. McAllister was solid down the left. Brown was immense at the back, while Tillson belied his inexperience with a calm display. Butterfield too was calm in the holding role, using the ball well, while Davies bust a gut for the cause and Harley showed his usual lightness of touch and even put in a crunching sliding tackle! The forward trio, particularly in the first half, ran the Swindon defence ragged – Nicholls scored one good goal and made another with a fine run, Wheeler will be giving Ormond-Ottewill sleepless nights with a lung-busting display and Nichols led the line well. The subs all played their part too.

So, for only the second time this millennium, City go into the draw for the second round, where they could meet Premier League giants such as Newcastle, Aston Villa, Everton or Bournemouth.