Adams career has almost exclusively been in Scotland both as a player and as a manager. As Ross County manager the 39-year-old led County  to several promotions, and to a cup final in which they lost to Dundee United.

He gives a great confidence he knows what he’s doing. He knows how to get teams promoted and he knows how to motivate people. He’s obviously very tactically aware.

He’s very quiet, but very quietly confident and not arrogant in any way. He’s got some bright ideas and we look forward to supporting him in building a great team that hopefully play very attacking fast football and, most importantly, winning.

You can see in terms of the way he speaks. It’s quiet confidence. It’s not driven by arrogance; it’s driven by quiet knowledge.

Derek Adams speaking on Argyle website about his appointment said:-

You’ve always got targets and you always want to do well. Plymouth Argyle had a fantastic season last season, getting into the play-offs, and I think we’ve got to push to get there again.

It wants to get back to where it thinks it belongs, and that’s in the Championship. For me, that’s the ambition this football club 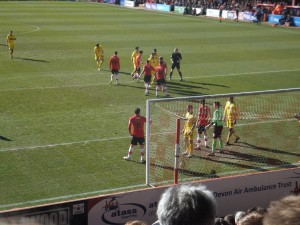 wants to show. That’s why I’m here. I’m here to try to make the football club successful, like John Sheridan did before, to move that on.

At any football club, you want to look after the youngsters and I think that brings the whole community together – you want to see a local player coming into the first team, through the youth academy and, finally, playing for Plymouth Argyle. I think that’s what could benefit the whole city.

One thing they’ll want to do is create an enthusiastic atmosphere at the games, which it can be. Over the years, they’ve taken a lot of fans away from home but the enthusiasm at home is beneficial as well.

Strengthening is a priority and obviously we’ve got a core of the squad from last season. We’ll definitely obviously have to add to that and, over the coming weeks, and we look to do so.”

I’m driven, I’m determined and I want to succeed. With that, you’re going to get pressure and that’s what drives me on.