The seedings for the first round of the Capital One Cup have been confirmed. Teams in the football League have been joined by Hull City, QPR and Burnley from the Premier league, and by Barnet and Bristol Rovers from the Conference Premier.

The draw will be announced at 10am on Tuesday 16 June. Ties will be played during the first week of the Football League season.

Exeter have been drawn at home in all their League Cup games since their return to the Football League, and have only progressed in that time from the first round the once – in August 2011 after beating Yeovil Town. 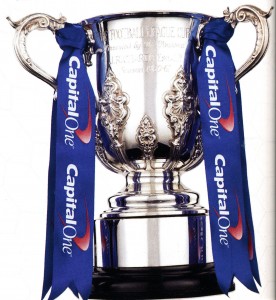 Note. The Football League have now confirmed that there will be a “North” and “South” split, but have not released details of which teams are in which divide.

We bring you the result of the draw as soon after 10am next Tuesday as we can.