As Exeter City fans will be aware, the Trust offers tickets each year to Trust members to purchase to the Charity Shield, the League Cup final and the FA Cup final.

It is an entitlement for all member football clubs to have a small allocation of tickets to pass on to Directors, players or sponsors. The Exeter City Trust, however,  offers half of those few tickets to Trust members via a ballot. This is done publicly through the Trust website and through the Club’s official website.

While Arsenal fans are getting hot under the collar and abusing the Club and the Trust about this matter, only 8 tickets have been made available to fans, however they’re not in any neutral zone. Other football clubs have also been given an entitlement to purchase such tickets, including many non league clubs who have helped to make this season’s FA Cup so interesting. However, those clubs have not made them available to their fans, and so no publicity, and so no abuse from Gunners!

Because of the reaction of Arsenal fans, Exeter City have now issued a statement, which can be read here. 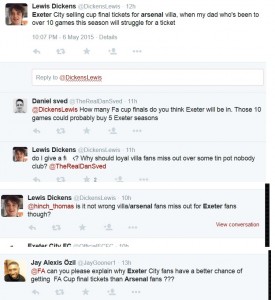