This report will no doubt be construed as displaying an air of “sour grapes”, your reporter makes no apologies for this – it is, after all, a “fan’s eye view” of proceedings. And this fan left Buckinghamshire seething at the par for the course antics of the home club, egged on by a refereeing display bordering on psychotic. The tone was possibly set when, during the pre-match warm-up, there was apparently a scuffle after a member of the Wycombe coaching staff got involved with City’s players.

Taylor resumed in defence with Alex Nicholls also restored to the starting line-up, which meant the outfield ten were the same as started the victories against Luton and Wycombe. Tom Nichols therefore had to make do with a place on the bench.

Wycombe, as befits a team chasing promotion, were quick out of the blocks, and should have been ahead inside the first minute – a delightful cross from the right found Paul Hayes unmarked at the far post but the former Plymouth man could only blaze wide when he should have at least tested Pym. However, City quickly adjusted, and drew the first yellow card of the match for a scything challenge by Steven Craig. Just as City got to grips with the pace of the game, along came the sucker punch with a very well-worked goal – Sam Saunders played a neat one two with Hayes before firing a swerving shot into the net, giving Pym no chance.

Try as they might City couldn’t force any openings, and the game was disrupted on several occasions – the City support didn’t like it when Aaron Holloway went down in a heap apparently for nothing, but perhaps mellowed when they saw his number called up as he was replaced by Matt McClure. Ten minutes later McClure himself departed the scene after coming off second best in a tussle with Ribeiro. City had meanwhile had the first of three penalty shouts turned down when Cummins was bundled over by Aaron Pierre, while Hayes again should have done better when well placed but blazed over.

While Wycombe started to waste time, taking twenty seconds over every restart, City were trying to press without much success, although there was another flashpoint later on in the half – a ball over the top saw Alex Nicholls in a foot-race with Matt Ingram, the Chairboys’ goalkeeper, who was second to the ball and clattered Nicholls. From behind the other goal it was difficult to see whether the challenge took place inside or outside the box, but in the end it was moot as the referee, Mr Williamson, was clearly blinded by the reflection off his fake tan and gave nothing. Cummins’ frustration eventually boiled over and he deservedly found himself in the book (your reporter yelled “He got the ball! Both of them!”). He then just failed to connect properly with a cross from the effervescent Lee Holmes, the ball blocked away for a throw. At the other end a Wycombe snapshot deflected off a team-mate’s hand – the hosts shouted for a penalty (the ball hit a Wycombe hand outside the box), the referee buckled and gave a corner despite the last touch clearly being a Wycombe one.

After a late-ish kick off and four minutes of added time in the first half, Wycombe compounded the lateness of the game by deciding to have an extra cuppa at the break, emerging five or more minutes after City, and proceeded to resort to their usual timewasting, the City faithful reminding the referee of this by loudly counting the seconds elapsed between restarts – at one point reaching 23. Oh, once again for City to have Keith Stroud, the excellent referee at Dagenham who clamped down on timewasting, booking several players.

Anyway, City pressed almost relentlessly, again without much clear sight of goal. Liam Sercombe had an effort from the corner of the box that Ingram deflected away – City’s follow-up runners anticipated the ball would be palmed sideways but instead it was pushed back out forwards, giving the defence the chance to clear. Both sides might have rued the hard April pitch as they each registered a header that bounced off the ground over the bar – Ribeiro the unlucky City player. At this point came another major flashpoint. A delightful move saw Sercombe released through on goal. As he steadied himself to finish he was taken out from behind. The defender would argue he got a touch on the ball, but he went right through the player to get it – an easy decision for the ref to give a penalty and a red card, but he bottled it. The look on Sercombe’s face, as he knelt on the turf in front of the away fans, arms outstretched, said it all. It was a shocker. 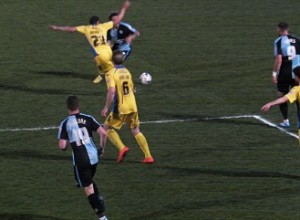 City threw on their attacking big guns with Nichols, Wheeler and Morrison replacing Nicholls, Cummins and, in a clear show of intent, right back Davies. Five minutes after the final change came the richly deserved reward. The ball was worked out to Holmes on the left, for the umpteenth time he put in a decent cross which was flicked on by Wheeler to Sercombe flying in bravely to net.

Wycombe for a while seemed to continue their attempts to kill the game, still taking an age over restarts, while City continued to press hard, sensing the momentum (as at Luton on Good Friday) was with them. However, as the clock ticked on towards the 90, they found themselves being given opportunities on the break, which also led to City engaging in some cynical play of their own with Ribeiro, Oakley and Harley all picking up bookings for tactical fouls. With the 90 almost up, and with City having forced a number of goalmouth scrambles, another long injury break ensued with Nico Yennaris having to be treated after going down and perhaps having some studs in his chest. During the break the board revealed six minutes of injury time. City had one more gilt-edged opportunity in added time, Ingram making himself big to pull off a remarkable reaction save, while both Hayes and Onyedinma should have scored at the other end after counter attacks, as suddenly a Football match was in danger of breaking out.

Then came a sequence of events that left a very bitter taste in City supporters’ mouths. Oakley was clearly fouled, but nothing doing, his own challenge appeared fair but guess what, a foul was given. From the free kick, City half cleared, but as Pierre and Nichols raced for the ball Pierre went flying, doing his best Dying Swan act under minimal contact. The referee as usual bought it, causing Tisdale to have something approaching a rant post-match about the similar incident involving Cummins in the first half. Hayes stepped up and slotted home, literally the last kick of the match, 12 minutes into injury time, causing angry scenes amongst the City support in contrast to the delight in the home ends.

It’s easy to suggest that City should have shut up shop after equalising, and played out a sensible 1-1 draw. However, wins are what’s needed, so Tisdale and his players will have been forgiven by the supporters for going after the three points especially against a Wycombe side who appeared to be reeling somewhat after Sercombe’s goal. The game was there for the taking, it’s just that the home side took it. Fair enough, these things happen sometimes.

What’s less edifying is that had Wycombe not been so cynical, they wouldn’t have had the opportunity to score in the 12th added minute. City did reap the benefit of this sort of thing at Dagenham, utilising the time added on for the hosts’ antics to the full with a late winner. There are a couple of points to make at this juncture. It is well known that Wycombe are a cynical side who will timewaste at every opportunity, will dive and feign injury, will bend the rules of the game to the nth degree, will commit niggly fouls to kill the game, their players and coaches will be constantly in the ear of the officials. It needs a strong referee to handle this, and for the t 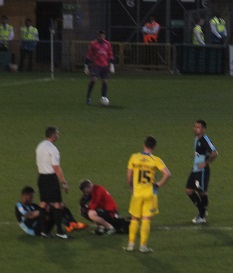 hird successive season the referee was weak in the extreme.

In actual fact Wycombe were nowhere near as bad with their gamesmanship as in the previous two fixtures at Adams Park – clearly buoyed by their lofty position they played with a lot more pace and purpose, often forcing City onto the back foot, and in Sam Saunders in particular they have a very decent player indeed. However, City felt they failed to get the rub of the green with the referee’s decisions, surely the clearest being when Sercombe was taken out when clean through on goal. They could have no complaints about any of their four bookings, nor the amount of time added on, but faced with key marginal decisions the margin appeared to come down on the Wycombe side every time.

City to a man battled gamely and nobody could be accused of leaving anything on the pitch as they gave it their all in what was, for many reasons, an enthralling encounter. City’s MOM would probably have been Lee Holmes, the skilful winger once again showing Tisdale why he should be signed up on a permanent deal in the summer with yet another encouraging display.

Tisdale will look to lift his beleaguered troops on Saturday, with the visit of Southend. At least they’ll come to play rather than stifle, we can hope. 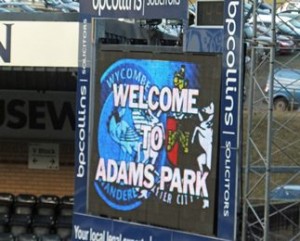