Home » Exeter City News » Are the Play-Offs out of the Question for Exeter?

Paul Tisdale hailed a “valuable point” in the aftermath of Saturday’s 1-1 draw with Morecambe. That it might be, but the result was largely viewed as an opportunity missed and two points dropped against a distinctly ordinary Morecambe. The Grecians now have just seven matches to overhaul four clubs with five points 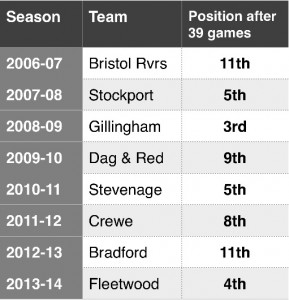 separating the green and red sides of Devon. A tough ask though not impossible – as Bradford showed two years ago.

Phil Parkinson’s Bantams, buoyed by their League Cup heroics when they eventually lost to Swansea at Wembley, rose out of nowhere to nab the final play-off spot back in the 2012-13 season. They were 11th with 55 points after 39 matches – identical to Exeter’s current position – and defied an eight point gap to reach, and eventually triumph, in the end-of-season showdown. Momentum is very often the key in play-offs and, should City replicate Bradford’s feat, you’d fancy them to reach League One. In fact, in four of the last eight League Two seasons, the play-off champions were outside of the top seven at this stage.

Whilst Tisdale’s sides have wilted rather pitifully at the end of the last few seasons, a wonderful late surge saw them come incredibly close to reaching the League One play-offs back in the glorious season of 2010-11.

After 39 games, Tisdale’s men were 10 points behind Bournemouth who occupied the final play-off spot. Six wins and one defeat later, the Grecians missed out on the top six by two points (when goal difference is taken into account).

A repeat of that run seems improbable considering Exeter face many of the top sides in the next month, especially with Tom Nichols missing the crucial clashes with Luton, Newport and Shrewsbury through suspension. But, as history shows, you’d be silly to completely write off the Grecians just yet.