so much as a draw. With the games coming thick and fast Paul Tisdale may shake things up a bit, with veterans such as Matt Oakley and Clinton Morrison possibly in line for a rest – the latter especially looked dead on his feet by the end of the Stevenage match. Lee Holmes made an encouraging debut from the bench and may push for a start as will David Wheeler, while Connor Riley-Lowe looks set to continue at left back in the absence of Jamie McAllister and Craig Woodman.

Despite picking up a point at Portsmouth on Tuesday night, Cheltenham dropped back into the relegation zone as Tranmere won at Cambridge and, with Hartlepool also coming into some late form, every point is vital for Russell Milton’s side. That

Cheltenham are struggling at all is perhaps down to some panic in the ranks as the Robins are now on their third manager of the season after Paul Buckle’s inglorious reign came to an end shortly after City recorded their first ever win over the side from Gloucestershire. Milton has attempted to steady the ship although while they are now difficult to beat so too are they finding wins hard to come by with their last six seeing one win, one defeat and four draws. Two familiar faces are likely to be in the Cheltenham line-up on Saturday – Matt Taylor, who played a huge part in City’s rise from non-league to League One, and Elliot Richards, who had a successful loan spell last season before choosing Tranmere over City in the summer. Wes Burns, on loan from Bristol City, has

scored four goals in eight games and will hope to play after missing the draw at Portsmouth with illness.

It took 11 attempts but City finally beat Cheltenham in the reverse fixture on Boxing Day – Tom Nichols scoring the only goal to give Tisdale the bragging rights over his former assistant. City’s last visit to Whaddon Road, again on Boxing Day the previous year, saw City dominate the match only to go down 1-0 thanks to a goal against his former club from Jamie Cureton. The overall record makes grim

reading for City supporters – just that solitary win this season against nine defeats with one draw. 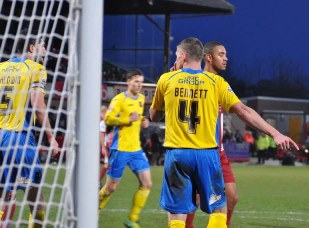