Saturday 21 March will be a visit to Whaddon Road for the Grecians to play the Robins in a League 2 match. Tickets for away fans can be bought on the day, details here.

Darren Drysdale, 43, a RAF Sergeant comes from Lincolnshire. He’s been an assistant referee in the Premier League, and was running the line in the 2000 FA Cup final between Chelsea and Aston Villa, which Chelsea won 1-0.

His professional debut was in August 2004 in a League 2 match at Nene Park when Rushden and Diamonds played Kidderminster Harriers.

His record this season is in 23 games Darren Drysdale has shown 79 yellow cards and brandished 6 red cards. 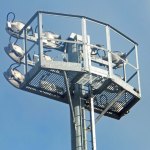 Previous: Luton Town Away is All Ticket for Exeter Fans
Next: Next Up: Cheltenham Town v Exeter City