This coming Saturday Exeter City travel to Bootham Crescent for a League 2 fixture against York City. Tickets are not available in advance, and it’s pay on the gate. More details on the official club site, here.

The official from Tyne and Wear is in his second season on the Football League list, having served a two season apprenticeship in the Football Conference in the previous seasons.

Just the one game for City. Last season at Gigg Lane in the 2-0 defeat to Bury, where he also sent off Danny Coles. 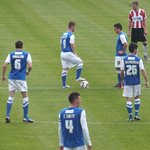