Former Exeter City midfield ace, Alan Gow, has signed for St Mirren it has been announced.

The 32-year-old has been given international clearance, so will be eligible Scottish Premier League game at Aberdeen. Alan Gow has signed until the end of season, following a four-week trial at St Mirren.

He left the Grecians last February, in a loan swap deal with Bristol Rovers’ Elliot Richards. He sent the Club and fans a fond farewell message, which we described here.

With the Devon Derby being played tomorrow, it’s a good time to remember his goal in front of the Big Bank against Plymouth Argyle last season. 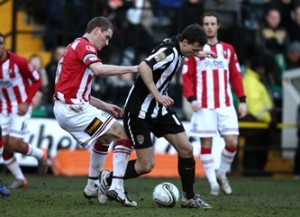