Jamie Reid has completed his loan period at Weymouth and now gone to his boyhood town to play for Torquay United for an initial 28 day youth loan.

His time at Weymouth has been successful with Jamie playing 8 times and scoring 3 times.

The Irish under 21 international has been recovering from an injury and clearly the Club thinks he’s in need of competitive first team football, before he returns to Exeter City’s first XI. He’s expected to feature in the Torquay United’s squad for their trip to Wrexham for the first leg of the FA Trophy semi-final.

Connor Riley-Lowe has also returned from his loan spell at Weymouth. 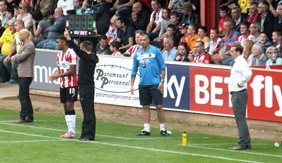