The first time that Exeter City played Portsmouth away at Fratton Park was in 1914. Both teams were in the Southern League and this was Exeter City’s sixth season as a professional club.

The cup tie had generated plenty of excitement. The reporter ‘Observer’ reporting in the Western on the day of the match was not confident of a win. He wrote:-

The prospects of both teams have been fully dealt with in this column, and I do not, therefore, intend to again go into detail, for nothing has transpired in the interval in any way alter the opinion then formed. Both teams have been going in for a strict course of training at home, and will line out this afternoon fit as fit can be. Of course, playing at home a big factor in Portsmouth’s favour, in addition to which they are the heavier side, and, seeing that the ground is likely to be soft, these circumstances will very probably more than counteract the admitted extra cleverness their rivals.

The team left for Portsmouth last evening, breaking the journey at Southampton for the night, and, if confidence goes for anything, they cannot see their opponents scoring the easy win the latter’s supporters have apparently been boasting for them. The excursion promoted by the City Supporters’ Club, which leaves Exeter at 9 o’clock this morning, is likely to a very heavily laden one, and the St. James’ Park Brigade should lack nothing far as vocal encouragement is concerned. Should they win, it will be a distinct feather in their cap; should they draw it will be a good performance, and one which is likely the faces of the Directors wreathed in smiles, for much depends this encounter as whether or not the load-stone of debt, which has necks so long, is so to be got rid of.

The Exeter team will be selected from Pym; Fort and Strettle: Rigby.

Lagan, Pratt, and Smith; Holt, Lovett, Whittaker, Brooksbank, McCann and Marshall. The probability is that Pratt will given the centre-half position, and, from what I learn, Whittaker the most likely one to seen as “”pivot.” Goodwin, of course, has not sufficiently recovered from his recent indisposition to appear outside-left, which position may be safely entrusted Marshall, whose form in recent matches certainly entitles him his place.

The Portsmouth side, except for possible last minute changes, will be: Heath: Sanderson and A.E. Knight; Walls. Harwood and Arnold; Hogg. Stringfellow, Mountenay, James, and Upton. The critic who would predict win outright, for either of these sides would be a bold man — for my own part, I fancy a draw, with Portsmouth the most likely to upset this.

City won the match 4-0 in front of some 18,000 spectators, of which about 1,000 had travelled up from Exeter. The Western Times excitedly reported the reception back in Exeter that evening:-

Saturday evening. The train steamed into Queen Street well on time, and the players as they stepped from the saloon, were welcomed by a great volume of cheering. The enthusiasm of their supporters knew no bounds. Holt and Marshall were Carried shoulder high through Queen Street. It is a long time since a local football success gave rise to such enthusiasm in Exeter.

As to the match, this is the report in the Western Times on the Monday:- 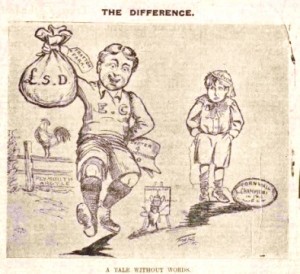 Few teams in the country would live with Exeter City the form they showed at Fratton, on Saturday, when, in the First Round the F.A. Cup Competition, they handsomely beat Portsmouth four goals to nil, thus bringing off what was, perhaps the greatest surprise of the day. In past seasons the Citizens have experienced the worst fortune in tourney, with the result that their financial position has always been a precarious one.

Saturday’s brilliant performance may be said, however, to have furnished the turning point, and players and officials, alike, are to be heartily congratulated on the brighter era which has now opened up for

them, but which has been such a long time coming that the lesser enthusiastic – not being gifted with the temperament of a Marcawber – had almost given up hoping. And there was not semblance a flake about the runaway victory they secured, for after the first 10 minutes the Citizens, who were superior both fore and aft, may literally said to have left “Pompey” standing still.

The performance was a truly great one, in which every man shared. The City’s chief strength lay in their defence, the home attack being held with ridiculous ease, while the visiting forwards were kept so well served with the ball that were a constant source of worry and danger to the home backs and custodian, who, as the game progressed, proved no match for them.

Both sides were full strength. Whittaker returning to lead the City attack, while there was no prominent absentee from the Portsmouth ranks. The ground was on the soft side, rain having fallen during the morning and continuing to do so while the match, was in progress. The general opinion prior the kick-off, among the supporters of the home team was that the Fratton brigade would not experience a great difficult triumphing, but, on the other hand, there was a quiet confidence about the visitors which commanded respect – they would not hear of defeat, and, even if they did not win outright, considered themselves good enough for a, draw.

As things turned out, the homeside were totally outclassed by

combination of defence and attack which even surprised the majority of the City’s supporters, and made the “Pompey” XI look a very indifferent lot — it was a case of race-horses v. cart-horses, and the Hampshire men had to be content with the position occupied by the latter when thus matched.

The gate totalled just over 18,000, included among whom were a contingent of about a thousand from Exeter, who gave the boys every encouragement that lusty lungs could command, and before the match was half over not few of whom experienced no little difficulty to raise a shout, their favourites having done so much worthy of being cheered, and being almost continuously doing it.

For the first ten minutes Portsmouth looked if they would justify the confidence reposed in them, but once Exeter got into their stride the homesters could not hold a candle to them, and they might well have been beaten by an even wider margin. The game was about ten minutes old when we experienced the first of many thrills, Holt, from a pass Whittaker, sailing through the defence to score with a shot which the home custodian had no chance of saving.

Stung by this reverse, “Pompey “strove hard to equalise, but found themselves up against a stonewall defence, and, after a splendid clearance, following a “free” given against Pym, the City were off once more, and play had been in progress but eighteen minutes when their advantage was increased. A pass Lagan saw Whittaker worry Heath, and before the latter could save his charge Marshall had dashed in to safely steer the ball into the net.

The supporters of the home team were beginning to rub their eyes, for here were the anticipated easy victims absolutely toying with their favourites, who were outpointed everywhere. “Pompey” did not for a moment relax their efforts, but they were of a very spasmodic character, and made by the Exeter defence to look very elementary. At the half-an-hour their hopes rose as the result being given a “penalty,” but few seemed know why it was awarded. The kick was entrusted to Warner, but Pym saved brilliantly, as he did a second time from a “corner.”

Half-time Exeter thus led by two to nil, and there could be no disputing that they were full value for splendid a lead.

Portsmouth started off the second moiety in more promising style, but soon died away again. Exeter were always “top-dog,” and after Pym had again distinguished himself, Marshall wound up a pretty effort by notching their third goal. Three and half-an-hour to go! The home supporters appealed to “Pompey” for at least just one, but they wasted their breath, the City holding them with an ease which brought look of bewilderment to the faces seventeen thousand people, and one huge delight to the other thousand.

The climax came just before the end, Holt capping a, brilliant solo effort with the visitors’ fourth goal. The homesters made desperate attempts to find the net, but they were the dying efforts of a spent force, and when the final whistle went they were a thoroughly beaten side, and Exeter one of the most pleased in the country, and certainly a combination in no way flattered by the extent of their victory – they were good value for their four goals, and had they won by even more one who saw the match would have been surprised, for on the form they displayed they would have had the beating of practically any side in England. Where all wore good, there is no necessity

to enter into individual criticism of the City side.

Every member of the team was on the top of his form, and there can now be no room for doubt as to their cup-fighting abilities. There was no dilly-dallying over-elaboration. It was on the ball and straight for goal with the attack, while the defence was brilliant in the extreme, and perhaps, chiefly responsible for the smashing victory secured. It always had the measure of the homesters, and the placing to the men in front was sure, very few passes going astray. Such form came as a revelation to the home crowd, whose favourites were beaten as they have rarely been before – in fact, it was their record Cup defeat at Fratton.

Who will the Citizens have to meet in the next Round? To-day’s draw

will supply the answer. One of the top-notchers at St. James’ Park would suit their book. I hope fortune will favour them, and I think we may rely the Directors giving the home crowd every consideration – despite the silly talk to the contrary we sometimes hear Exeter are entitled to something out of the Cup, and, on Saturday’s form, will get no mere bagatelle.

The gate receipts for the match was £712 which would have been shared between the two clubs. Aston Villa was Exeter’s next opponents in the FA Cup second round. Exeter lost 2-1 at St James Park.