With four points earned on their travels, City return home still very much in the playoff picture as the season begins to head towards the home straight with a match against a Tranmere side deeply embroiled in the relegation dogfight albeit

having shown signs in recent weeks that they may have the gumption to pull away.

Ryan Harley missed out completely at Oxford, while Scot Bennett was forced off with an injury sustained as he tried in vain to prevent Oxford’s first goal. There was better news as Christian Ribeiro, who missed the win at Mansfield with a training injury, was able to return from the bench to replace Bennett. If the club captain fails to recover in time for the Tranmere match it may signal a return to the back line for Danny Butterfield, although new signing Jamie McAllister may be preferred. Clinton Morrison is also MIA currently having limped off at Mansfield.

City supporters took a keen interest in Tranmere’s fortunes at the start of the season thanks to the appointment of club legend Rob Edwards as manager which also saw Matt Gill installed as his assistant. However, it all went pear-shaped

quickly for Edwards, including a defeat against his former employers, and he was soon ousted to be replaced by Micky Adams. While the Birkenhead club still struggles, and goes into Saturday’s game only out of the relegation zone on goal difference, there has been more solidity under the experienced guidance of Adams, albeit their last match was a 1-1 home draw with whipping boys Hartlepool. Adams has also overseen a massive turnover of players, with 39 already having been used in league matches. Swansea loanee Rory Donnelly will be one to watch, he bagged his first goals for the club with a brace in the 3-0 win over Accrington, while Kayode Odejayi is always a handful.

The reverse fixture saw master emerge victorious over pupil with City winning 2-1, Cummins and Moore-Taylor scoring either side of a reply from Danny Holmes,

although City also had a couple of goals disallowed that might have given more of a sheen to a match which they dominated for large spells. Tranmere’s last visit to the Park in November 2011 was also an unhappy one, as a rampant City side won 3-0 with goals from Bennett, Coles and Logan. However, Rovers have the upper hand in Football League matches with 16 wins to City’s 12 (5 draws).

Guide to St James Park for away supporters: http://www.exeweb.com/2012/05/29/the-things-you-need-to-know-st-james-park-exeter/ 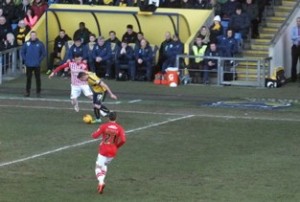