The match officials have been appointed for next week’s first legs of the 2014/15 Capital One Cup Semi-Finals. All games will be shown live on Sky Sports.

The second legs will take place as follows:- 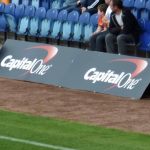