The tradition of playing a game on Christmas Day was there at the beginning of the professional life of Exeter City, starting with a 2-1 win over Millwall in a Southern League game in 1908. Weather permitting the Boxing Day game would be the reverse fixture. If Christmas Day fell on a Sunday, the games would be played on Christmas Eve and Boxing Day.

Normally the fixture would be ‘local’, e.g. Bristol Rovers, Torquay United or Plymouth Argyle, but a number were London clubs recognising the convenience of the rail links between Exeter and London. A number of the games over Christmas were against Plymouth Argyle, but it took until Christmas Day on 1925 before we achieved a win over Argyle (4-0 at St James Park).

The tradition of Christmas Day games finished for the Grecians in 1957. That year Exeter beat Torquay United 3-1 at Plainmoor and followed that up with a 5-1 win back in the Park on Boxing Day.

In 1913 Exeter City played two games against West Ham United in a set of Southern League fixtures. The first game was at Upton Park on Christmas Day, it seems the 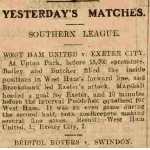 local press didn’t send a representative to the game, so the report is brief. First though is the Western Times on the team news:-

The Exeter City team to play West Ham at Upton Park on Christmas morning will be: Pym; Fort, Strettle; Rigby. Pratt. Smith; Holt. Lovett, Brooksbank. McCann. Marshall. The party will journey back in the afternoon in preparation for the return match on Boxing Day. The team for which will chosen on Friday morning.

Then on Boxing Day 1913 we get the match report in the Western Times which said:-

At Upton before 18,000 spectators. Bailey and Butcher filled the inside

(positions in West Ham’s forward line, and Brooksbank led Exeter’s attack. Marshal headed a goal for Exeter and 10 minutes before the interval Puddefoot equalised for West Ham. It was an even game during the second half, both goalkeepers making several fine saves. Result: —West Ham United, 1; Exeter City.

Report of the game at St James Park on Boxing Day to follow. 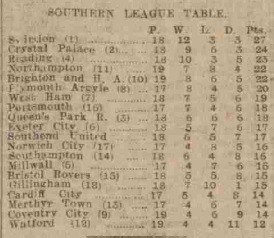