From the Western Morning News. Monday 3 October 1932. A report of a Division 3(s) match between Exeter City and Luton Town played on Saturday 1 October.

Exeter City delighted seven thousand spectators at St. James’s Park Saturday by playing their best football of the season the match with Luton Town, and winning well by two goals to nil. Luton battled hard against a superior team, but towards the end were overrun, by the smart home forwards, and had to thank Harford, their goal-keeper, for escaping as lightly as they did.

Whitlow was called up from the re- serves to lead the Exeter attack place of Poulter, and the

improvement in the City’s front line, under Whitlow’s inspiration, was soon apparent. Skilful positioning and polished footwork were features the newcomer’s play, and from start to finish the kept the line well together with stylish passes, many of which were the nature of complete surprises to the opposition.

Houghton, who has found it difficult to get going this season, made big strides in this company, and by clever midfield play paved the way for some exhilarating Exeter attacks in the first ten minutes. Higgins, at inside-right, whose tenacity has made him a big favourite already, gave his best display date, and had the satisfaction of scoring both the goals. He owed his opportunity in each instance to his centre – forward, Whitlow steadying a far-flung ball and placing a perfect short, pass for the inside-right to drive into the net.

By comparison with the good work of the inside trio the wingers were disappointing at times, Scott failing to make the best use of some particularly well-made passes, and Welsby still being unable to accommodate his style with any certainty the methods of the quick-footed inside-left. Perhaps Houghton vas partly to blame for this, because he sometimes held the ball too long. 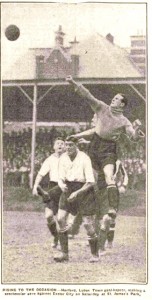 Generally speaking, however, there were far more skill and “snap” about Exeter’s attack than in any of the seven previous matches, and the consequence was that for once in a while the team was so well balanced that the halves and backs were able get through their work with comfort.

The return of Childs to centre-half after one week’s absence through injury was another very helpful factor the home side, his forceful play having a great deal to do with the slowing down of the Town forward machinery, while he made innumerable strong interceptions, and was highly successful in placing the ball his forwards.

Barber, at left half-back, was also an outstanding figure, and excelled again with dangerous lobs to the goalmouth. Clarke, on the other flank, was not so happy. Twice received leg hurts, but he came along with a rare speed towards the end.

Exeter took the lead in fifteen minutes, and from then onwards for nearly an hour a stirring struggle was in progress. The City were the cleverer side, but McGinnigle, from the centre-half berth, set Luton a fine example the way of sustained effort, and the action was not by any means all at the Town end of the field.

The Luton attacks, however, only served to bring out the high lights in the Exeter defence, Miller and Gray giving a masterly performance.

Harford had exceedingly busy time, especially towards the end, when the Town wing half-backs showed the effects of a strenuous game. Beaten for pace, Kean and Fraser were able to lend only poor support in defence, and shot after shot was rained in on the Luton goal, the Exeter forwards being joined by their halves in this phase.

Harford’s anticipation was admirable. Surprise shots as well as hard drives always found him to position, and he continued win the admiration of the spectators to the end.

Some time before the interval Harford saved a penalty, but as it happened this was not his most striking effort. Houghton took the spot kick, and placed a rising ball so close to the Town goalkeeper that he was able to beat the ball out easily with his left hand.

This penalty incident came at what appeared to be rather a critical stage in the game, Luton having warmed up to their work, and being in the mood for big deeds in their efforts to equalize Higgins’s first goal.

Luton were handicapped, no doubt, by the absence of their regular leader, Tait for whom Brown, an ex-schoolboy international. deputized. Brown showed pace, and was always eager to try his luck with a shot, but he was so well covered the home defence that his chances of distinguishing himself were almost nil. At outside-left, too, the Town had a reserve player, Corkindale deputizing for Rowe, who was unwell Kingham, Mackay, and McGinnigle were the pick of the visiting players apart from Harford.