Home » Exeter City News » Cummins Having a Go, But the Start Was Hard Enough

Exeter City’s ‘three in three’ hero Graham Cummins has admitted that life at Exeter was extremely difficult before his first goal for the club and, three days later, the side’s crucial win at Cambridge.

Speaking to the 1931 Fund, a group of Exeter Exiles and fellow fans who pay half his wages, Cummins said:

To tell you the truth, a couple of weeks ago when we were losing and I wasn’t scoring it was

The penalty against Oxford cheered me up and the Cambridge win was massive for confidence and we should have won by more.

Cummins is also humble enough to admit that City’s slow start to the season, and his own lack of a goal in August, might have cost him his place in many other teams. He reflected:

I’ll be honest with you, at most clubs I wouldn’t have got the run of games that I’ve had at Exeter. Was it five or six games I went without a goal? I’d have been dropped.

That’s been a good thing about being here. There’s the chance to get into my rhythm, to have that run of games. If I get a run of games, I’ll get goals, and now the team’s playing better and we’re winning; it’s all much better.

While he was comfortable enough dispatching the penalty against Oxford – “The keeper moved early and I just stuck it in the net” – Graham’s goals at Cambridge and Tranmere were markedly different in terms of decision making time. He recalled: 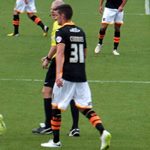 That kind of helped. Sometimes with too much time you’re like ‘What the hell am I going to do here?’ At Tranmere, though, I can remember thinking ‘This is so slow, will this ever come on to me?’ But I knew where the defender was and even the keeper was able to get back having touched the original shot and give me a dead leg. But I went with me head, and put it in.

Cummins also addressed the occasional criticism of Exeweb posters that he’s too interested in winning free-kicks, sometimes at the expense of riding a challenge. He explained:-

I get that sometimes and I understand it. But I don’t see the point if I’ve been knocked off balance, why should I let the centre half get away with that? If he fouls me and I feel I can’t control the ball as I’d like, or if the ball’s been knocked up to me and I don’t think there’s support for me, it’s smarter to try and win a free than take it down and try to beat three fellas. You’ve got to be realistic.

If the ball’s come up the field and we’ve been under pressure, then we don’t want it coming back down again. If the support isn’t there for you, get your body in

front of him and try to make him foul you. And in this league there are so many goals from set pieces, it’s a good chance to attack – probably a better chance than trying to create something when I’ve been knocked off balance or when there isn’t the support there.

The 1931 Fund has committed to raising around £20,000 towards the cost of having Graham at St James Park for the season, support from the fans which the club – and most recently even Liam Sercombe in his Express & Echo column – have confirmed was essential in being able to afford him. It seems clear that without the 1931 Fund, Graham Cummins wouldn’t be an Exeter City player.

City’s well publicised financial difficulties, combined with Graham’s hat-trick of games with goals, have proved a boost for the 1931 Fund, with around ten new members pledging to invest a total of around £2,000 extra into the Fund.

The Fund’s founder, Alan Crockford, is a relieved man, speaking to Exeweb.com

We lost a few members through our previous Number 31, Elliott Chamberlain, not getting a look in last season and a few more in the summer with all the turmoil at the club. I thought the PFA loan business was a scandal too, and I understand why people thought, ‘Ah, why bother, leave them to it…’

Even the Brazil tour was a worry, with hundreds of thousands of pounds of City fans’ money spent on air fares, Rio hotels, Ipanema lady-boys and God knows what else!

When it became clear just how much City were struggling to assemble a squad, there was a steady increase in interest in the 1931 Fund again. And now that Graham’s

got a few vital goals, there’s a few more people seeing that £19 per month isn’t a fortune – it’s not nothing, but it’s reasonable and affordable for quite a few of us – and that if we keep supporting the fund in good numbers it can be a great way of helping our club.

But, having raised £55,000 in five seasons, the challenge of finding £20,000 by May 2015 is a tough one for the 1931 Fund. Exeweb is proud to be helping, with a successful World Cup sweepstake now being followed by the first of two FA Cup themed competitions to support the Fund.

I’m not fussed about shirt numbers. I don’t feel that need to wear a 9 or a 10 or some other small number, so 31 is fine.

And he also points to his Irish roots as evidence that he understands what it means to play for the fans.

Back in Ireland that’s what I’m used to. My dad was my first manager … even at Cork, the club was fan owned as well; the chairman and everyone, they were just fans. It’s great.

If you’re interested in contributing to the 1931 fund and Graham Cummins wages, then contact the fund-raisers at [email protected]