A visit to Tranmere isn’t normally a fixture City supporters eagerly scan the fixture list for, but this season it’s different ever since the side from the Wirral announced their new manager. The term “legend” is all too often bandied about in Footballing circles, but Rob Edwards is well-deserving of the tag in

relation to the impact he had on City’s fortunes during his time at the club. City travel to the north west in buoyant mood having finally registered their first victory – with a magnificent performance to boot – at Cambridge on Tuesday night. City are likely to be forced into one change as club captain Scot Bennett limped off with a knee injury and is unlikely to be fit to travel, so Christian Ribeiro is likely to deputise unless Pat Baldwin has recovered from his own injury.

Following relegation and the departure of Ronnie Moore, Tranmere, and their Chairman, ex-FA boss Mark Palios, looked to the aforementioned Edwards to stabilise the club and lead a recovery back to League One. Edwards has been busy in the transfer market, landing three former City team mates in Matt Gill (now also Edwards’ assistant), last season’s loanee from Bristol Rovers, Elliot Richards, as well as Danny Woodards. The latter is very unlikely to feature as he has been out since late August with a broken metatarsal, but Gill and Richards have featured regularly and both will expect to take the field against their most recent former employers. Jason Koumas will be another to watch, the one-time Premier League star having returned to the club back in August 2013. Abdulai Bell-Baggie and Cole Stockton lead the scoring charts with three apiece for a side that has so far registered two wins and three draws 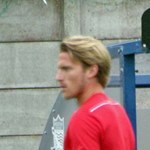 (including successive 0-0 draws in their last two fixtures) this season and sits in 15th place going into Saturday’s match.

Prenton Park hasn’t been a happy hunting ground for City, the last victory coming back in 1986. The sides last met in City’s relegation season in League One, both matches seeing comfortable wins for the home side. City ran out 3-0 winners at the Park (Bennett, Coles and Logan) before falling to a 2-0 reverse in March as relegation beckoned (Labadie and Cassidy). Tranmere hold the overall league head-to-head lead with 16 wins to City’s 11 (five draws).