The Club are delighted at the call up, and have said

Everyone at Exeter City would like to express their pride in Matt and Christy for earning their selection, as well as wishing them the very best of luck for their time on international duty.

A rare international call up for any Exeter City player for any England squad. The two players will go to the England HQ at St Georges Park, the day after the Northampton Town game.

Boothroyd speaking on next week’s international: 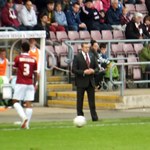 These are great experiences for individual players, from which mean both club and country will benefit.  The match is the beginning of a full programme of international fixtures for this group, finishing with the Toulon Tournament in May.

Romania have a strong history of producing senior international players from their youth teams, and this game will be a good test for us. I am both excited and proud to be working for my country in such an important age group. This current squad has a mixture of talented players with different experiences.

Interview on the Club’s official channel on You Tube

Previous: Next Up: Northampton Away
Next: Exeter City Spent £1000 on Agents’ Fees Last Season