Just 2,741 turned up yesterday to watch the 1-1 draw with York. Whilst that may be a bumper crowd for Torquay, it must surely set alarm bells ringing for Julian Tagg. Fans are choosing to stay away after a worrying continuation of last season’s poor form.

Thankfully, the Grecians have a loyal base of supporters who will support the team through thick and thin – the majority of whom are season ticket holders. The challenge now for Mr Tagg and his colleagues is to win back the ‘floating fans’ who have been dwindling since City’s decline from League One. 8,500 flocked to see Exeter against Morecambe back in the 2009 promotion season. Where have most of them gone?

Many will have switched sports to watch the hugely successful Exeter Chiefs at Sandy Park. The egg-chasers now average close to 10,000, a far cry from their County Ground days in the second-tier of English rugby. The Chiefs’ success has undoubtedly hit St James’ Park gates as the Grecians flounder.

3,448 watched the 2-1 win against York almost exactly a year ago – 707 more than yesterday. The worrying drop hardly comes as a surprise given the lack of entertainment on offer at St James’ Park – just two home wins in 2014 – coupled with the hassle of getting a ticket in advance to avoid higher prices on the gate. £19 is the cheapest adult price at the turnstile to watch a side who averaged less than a goal a game in League Two last season.

It is hard to understand why the club makes watching games at a reasonable price so difficult for fans, many of whom part-own the club. Instead of continuing with the ‘buy in advance’ shambles, perhaps City should introduce a flat price for the Big Bank, lower than the current £19, as a way of enticing more supporters back to SJP. In addition, the club really ought to reverse the doubling of under-18 gate prices, particularly as these are the age group less-likely to want to book in advance.

These are simple but much-needed suggestions. This young City side will not find life easy in the direct, physical fourth-tier so will need all the support they can get. The club now need to ensure there are as many fans as possible through the turnstiles to cheer on the boys. 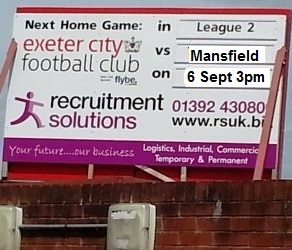