Exeter City have, as expected on the lifting of their transfer embargo, snapped up Irish centre-forward Graham Cummins on a free transfer. He becomes Paul Tisdale’s long-awaited first signing of the summer.

The 26 year-old began his career in his native Ireland, spending time at Cobh Ramblers and Waterford United before an impressive spell with Cork City, where he was named in the First Division Team of the Year and won the First Division Player of the Year award. Cummins then made the move to England, joining Preston for an undisclosed fee in January 2012. He struggled to make an impact at Deepdale though, and spent most of last season on loan at Rochdale – scoring four goals in 27 league games to help Dale win promotion. 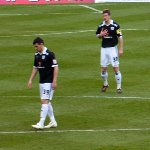 In action for Preston against City

“I’m here to prove myself, I want to score and every striker is judged on scoring goals,” Cummins told BBC Radio Devon, before adding, ”I’ll work hard for the team and I’m here to prove a point.”

Cummins wages will be part-funded by the 1931 fans group, in which member contributions pay for the wages of a player. This is usually for young players, however Paul Tisdale told the Western Morning News earlier in the month that this will change for the current campaign. “We have plenty of young players that are on contract, so we felt we should go in a different direction and, again, I am very grateful to the 1931 Fund and the supporters involved for their donations.”

The new Exeter City number 31 is likely to make his debut in tomorrow’s Devon Derby, providing all the relevant paperwork is completed in time.