It’s been confirmed that Danny Coles, aged 32, has signed for Vanarama Conference side Forest Green Rovers. In a career spanning 450 games playing for 5 clubs, Coles will be dropping down a league to play in the Conference.

Danny Coles was placed on the transfer list by Exeter City after abusing fans on Twitter. He was then reminded of his responsibility  having fall foul while on the Brazil tour when implying the use of the “c” word on Instagram.

He’s played 123 times for the Grecians, scoring 8 goals, after signing in 2011. Exeter were riding high in League 1 when he joined in 2011, having just finished 8th. Since Coles has joined Exeter were relegated to League 2 in his first season, then finished 10th and 16th last season. 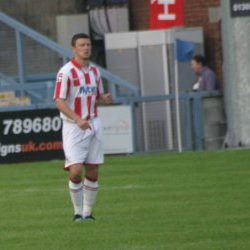 The relationship between fans and Danny Coles became strained last season, with critical errors from Danny Coles, such as against Burton Albion at home last season, and then taking to Twitter to defend Paul Tisdale against the very vocal criticism of Tisdale’s tactics. On Social Media and on Exeweb,com there is almost unanimous delight at his departure.

Coles speaking to Forest Green Rovers spoke of his move:-

Everything about this club fits, the ambition, the location. I’m 32 now and its a challenge that I’m relishing and looking to get the club out of the Conference and into the Football League. I’ve done a full pre-season (with Exeter), I played 70 mins on Saturday just gone against Torquay and have also played a full 90 mins earlier. It’s going to be a long hard season and it’s something that personally I’m going to relish. This is a club going places and I want to be part of it.

Previous: Capital One Cup 2014/15: Round 1 Referee Appointments
Next: Supporters Match on Sunday in aid of the Adam Stansfield Foundation